Home > Our Blogs > Facing Canada > A Trip to the Zoo

A Trip to the Zoo

Finding space to create movement in our lessons is important for our kinesthetic learners. If we do not find ways to engage them, we can expect to lose them. Moreover, movement is important for all students. It wakes them up, energizes them, and an alert student is more likely to learn. What follows is a lesson that was developed with the help of Jasmine Wong, program associate for the Toronto Office of Facing History and Ourselves. It relies on the use of the Gallery Walk, thus getting students up and moving. The lesson was designed specifically to meet the expectations of locally developed Genocide and Crimes Against Humanities course, CHG38 (see expectations as listed in the Human Zoos Lesson plan), but can be tailored to most History courses.

Human Zoos represent one of the most profound examples of 'othering' in modern Western Culture, and are a glaring example of a "process of national and collective identity that contributes to misunderstanding, stereotyping, and conflict," (Facing History Scope and Sequence, We and They). Growing out of a distortion of evolutionary theory, they share their roots with, and also largely helped justify, other disturbing Western manifestations of the early Twentieth Century, such as the American and Nazi Eugenics movements.

Human Zoos came to prominence toward the end of the Nineteenth Century (not coincidentally following the rise to prominence of Darwin's theory of Evolution). Understanding Human Zoos, thus, requires students to understand the origins of the modern concept of racism, which has its roots in the distortion of evolutionary theory. Evolution was twisted into Social Darwinism and Craniometry, which were then distorted into Scientific Racism, which in turn substantiated the development of Human Zoos. It is important that we make it clear to students how easily [pseudo] scientific concepts can be misrepresented and developed into grounds to justify discrimination. So, to help students understand the development and impact of Human Zoos, first we must help them to learn these concepts and their progressive development. 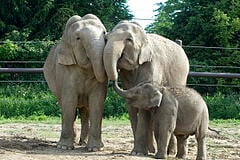 Asian elephants at the Columbus Zoo and Aquarium

With the background knowledge established, prepare to take your students to the zoo. I recommend posting images before the students arrive. On the walls, post several images of ‘standard zoo creatures’ that are immediately visible, and several images of ‘human zoo creatures’ (keep these image hidden for now). Before you ‘go to the zoo’, have students consider what they might expect to see at the zoo? Who would go / be taken to the zoo, and why? Make sure that students grasp the ‘shock and awe’ value of the zoo. [This is a good time to teach / review document-based questions.] Before they go, I also like to partner the students up (for safety reasons of course) and give them a guide sheet for viewing one of the exhibits.

Unleash your students on the zoo in two waves. First have them visit the ‘standard exhibits’ with their partner, return to the group, and debrief. Next, uncover the ‘Human Zoo Exhibits’, and send your students to visit them, and debrief the similarities and differences between the two experiences:

After having visited the zoo and debriefed, have students, with their partner, reflect on their experience. Have them imagine that they are a young child (the common target group of the zoo experience) and that you have been brought on a school trip to visit a Human Zoo… Ask them: “What impact would this have? How might this affect you as a child? How might this sight affect your view on other peoples [or yourself]? How would this shape their adult understanding of the world later in life?”

Help us to keep them moving… if you have a lesson idea that will keep our Facing History and Ourselves students moving, please share it below, be it a Gallery Walk, or otherwise. 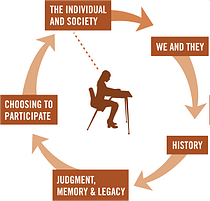 Topics: History, Racism, We and They, Lesson Ideas

I am a multidisciplinary teacher at the Scarborough Centre for Alternative Studies (SCAS) with the Toronto District School Board. I am fortunate to work in a wonderful school, even if its acronym does not share the wondrous luster, and welcome your feedback to my posts that I might grow and improve in my instructional practice as I hope my thoughts may also aid yours.