Home > Our Blogs > Facing Canada > Beyond Anne Frank: Using an arts-integrated approach to explore victim experiences during the Holocaust

Beyond Anne Frank: Using an arts-integrated approach to explore victim experiences during the Holocaust

The students in my Genocide and Crimes Against Humanity course gained new and meaningful perspectives on what life was like for those targeted for extermination by the Nazi regime by creating a unique and innovative art exhibition that explored the lives of young victims of the Holocaust.

Earlier this year, I took my class to a public exhibition about Anne Frank. While generally informative, my students were not particularly impressed. They were left with more questions than answers. In particular, they suspected Anne Frank’s story—while powerful and heartbreaking—was not the typical victim experience during the Holocaust. Surely, not all Jews found places to hide, nor is it plausible they could all write with the same sophistication and grace. To help us dig deeper, I came up with an idea—in collaboration with art educator Ms. Agnieszka Chalas—for a project designed to encourage critical thinking about this dominant narrative surrounding the Holocaust. In the process, students also confronted the often-referenced number: six million. It is widely known that six million Jews were murdered during the Holocaust, but who were they? What were they like as individuals? This project invited my students to look beyond the number to see the victims as real people—human beings with passions, desires, beliefs, and fears.

Using a suitcase motif—ubiquitous in Holocaust iconography—I challenged my students to create an art installation at the Studio Art Gallery at Queen’s University based on their understanding of diaries written by seven tweens and teens during the Holocaust.

Working in pairs, students were assigned the diary of one victim published in Alexandra Zapruder’s extraordinary collection Salvaged Pages: Young Writers' Diaries of the Holocaust. After an initial read, students independently produced identity charts for their diarist—a popular Facing History teaching strategy that helps students consider the many factors that shape people as individuals and as members of a community. The students compared and contrasted their identity charts with their partner’s before submitting for feedback.

With the expert guidance of Ms. Chalas, the students were then introduced to the work of artists who have created installations using suitcase themes. Inspired by these exemplars, they returned to the diaries and their identity charts to narrow their focus and identify physical objects that would represent the personalities and histories of their Holocaust victim. 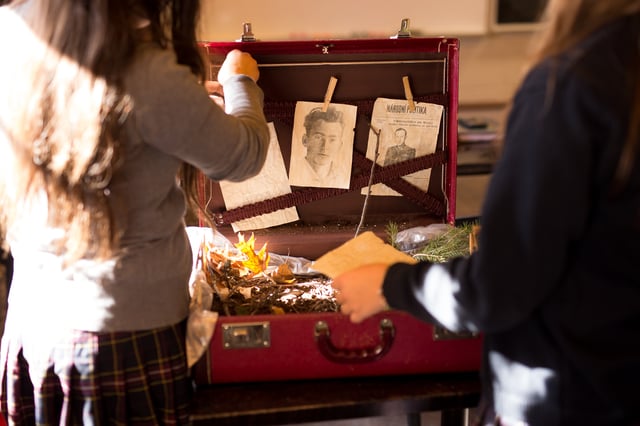 Though a series of scaffolded drafts, each pair was then tasked with writing a wall panel detailing their diarist’s biographical information, their specific historical context, and a rationale for each item they chose to include in their suitcase. It was also their responsibility to conduct a close reading of the diaries to select a powerful and provocative pull quote to complement their wall panel text.

The final suitcase assemblage was an opportunity for the students’ creativity to come to the fore. They strategically placed their representational artefacts in their suitcases to achieve maximum didactic and emotional effect. Installation at the gallery included placing each completed suitcase, in close proximity to their accompanying explanatory wall panel, on a giant painted canvas map of Nazi-occupied Europe. We hosted a grand opening reception to celebrate the students’ hard work which kicked off the exhibition’s ten day run. 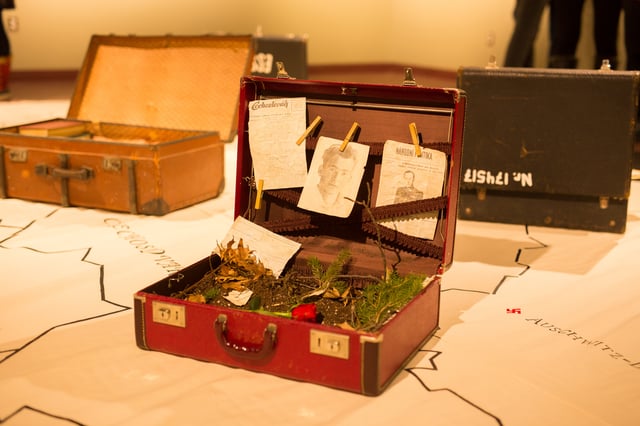 The final stage of the project included personal reflections of student historical learning and the process of creating a unique art exhibition as historian-artists.

Seeing each other’s suitcases spread out across the expanse of the map of Europe and filled with such different objects, my students resonated with the variety of historical perspectives and experiences. “I learned that every single person involved in the Holocaust has a unique story,” one student explained. “All of the people—victims, perpetrators, bystanders, etc.—came from different walks of life. Some were poor, some middle-class, some rich, [but] all of them were people—just like us.”

Interested in using Salvaged Pages in your classroom as a way to deepen and personalize student interactions with history? In their featured collection, Teaching Salvaged Pages, Facing History has produced a myriad of user-friendly teaching resources including diarist bios, images, readings, and full lesson plans.

To check out a more detailed bio for Michael Pitbaldo click here.

Michael Pitblado teaches history at Leahurst College, an independent secondary school in Kingston, Ontario. He is also a doctoral student in the Faculty of Education at Queen’s University where his research focuses on curriculum theory, history teaching, and Holocaust education.