And so began my endeavor. To begin, I showed my students a variety of primary documents all displaying  examples of discrimination. I gave them no details on what the pictures entailed. I had them walk around in groups and engage in a silent conversation with the documents and each other by writing out questions, thoughts and ideas, and responding on paper to the responses of others. This strategy is called “Big Paper.” 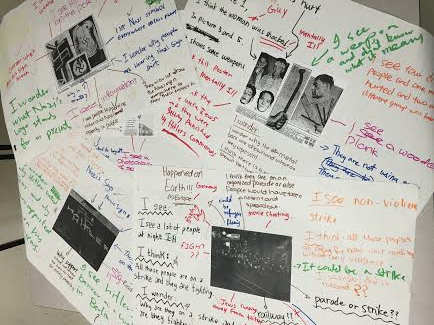 Through these conversations, students asked some great inquiry questions about the images. An overall theme however, was the constant narrative that these incidents were all in Germany. How surprised they were when they learned that all the documents they analyzed were from Canada! This led to a discussion about the Christie Pits Riot, and other displays of Anti-Semitism in Canada. I then had them delve through current newspapers and find other examples of hatred, prejudice and discrimination that are still occurring today in Canada. This left us with many questions, but the one my students really wrestled with was “Why not Canada?” What was it about the political, economic and social systems within Germany that culminated in the Holocaust, yet similar ideologies did not escalate to mass violence in Canada?

So Why not Canada?

To answer that question, I showed my students the video “Preconditions for the Holocaust” by Doris Bergen and had my students fill in a Connect-Extend-Challenge worksheet. 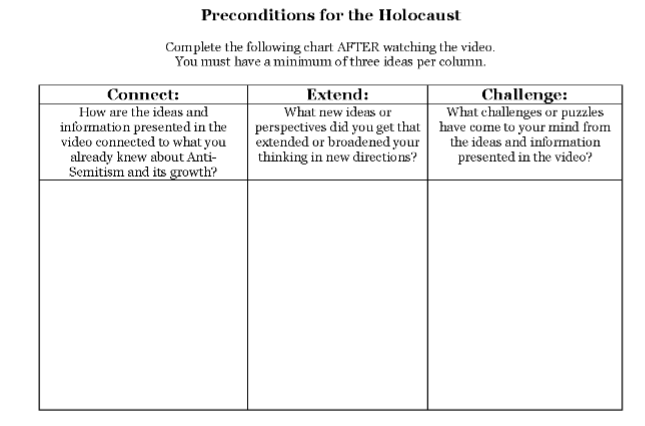 They connected to ideas they already had and extended their thinking in new directions, all the while trying to inquire into the question- why not Canada? What made the conditions in Germany so different than in Canada when a lot of the root ideologies and base violence was there?

After the video, we had a class discussion that looked at the impact of the depression, the political climate and system in place, and a lot of Germany’s history. To end the class I had them write a journal reflection on this question: How can we stop discrimination and hatred from growing in Canada?

The students came up with meaningful responses aimed at how their own personal decisions could have a large influence, as well as actions that our government should take to protect its citizens. As many students in my class were ELL students, it was interesting to read the consistent thread regarding how blessed some of them feel to live in Canada, countered with a desire to right past wrongs and contribute to make Canada a better place.

I am constantly striving to find new ways to help my students find themselves within the curriculum. As such I will continue to endeavor to find ways to incorporate reflective pieces that aim at having students personally grapple with the darker parts of our past, while also celebrating Canada’s successes.

How do you help students wrestle with the darker side of Canada’s past?