There are many tools you can use to watch and analyze trailers, clips and movies with your students online: Much of young people’s knowledge and competencies of visual literacy is developed outside of the classroom. And so, analyzing film as visual texts allows students to examine the nuanced play of images and to further assess the deeper meaning or purpose of the film. This provides students, many of whom can easily function in the visual world, the proper critical skills in order to understand the visual messages. As acclaimed director Martin Scorsese (2012) notes:

So much of today's society is done visually and … one has to know it's a very, very powerful tool… They need to know how ideas and emotions are expressed through a visual form, panning left and right, tracking in or out, booming up and down, intercutting a certain way, the use of a close-up as opposed to medium shot. What is a medium shot? What is a long shot? And how do you use all these elements to make an emotional and psychological point to an audience?

What does it mean, though, to include film as a visual text in the English classroom?

To begin, start with introducing and discussing various cinematic techniques: 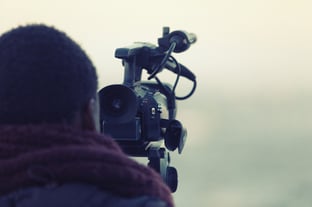 *More information on cinematic techniques in a condensed handout format can be found here which is an adaptation/summary from parts of  Louis Giannetti’s book Understanding Movies that provides more in-depth descriptions and examples. The CineFix YouTube channel also provides great comprehensive examples of cinematic techniques, and more!

Examples for your classroom

Some examples of films that provide good examples of images or scenes for analysis would be:

Some examples of high school film units can be found here on my blog.

I am a strong believer in implementing film as a visual text in English classrooms, and I acknowledge that teaching ‘film as film’ can be a daunting task, as it took me quite a while to learn, and collect and develop resources. But once you do have the strategies, it will be of such benefit for your students!

Claire Ahn is an Assistant Professor of Multiliteracies in the Faculty of Education at Queen’s University. Prior to entering graduate school she was a high school English teacher for ten years where she developed, with help and guidance from her colleague and mentor Brad Smilanich, an extensive film analysis unit that was implemented school and district wide. Some of the worksheets introduced above (Shrek Scene Analysis and Presentation scene analysis) were developed by Brad and can also be found, among other resources, on his website. If you have any questions about teaching film or are potentially interested in a workshop on teaching film in an English classroom feel free to contact Claire at claire.ahn@queensu.ca. Photo courtesy of Garrett Elliott and Faculty of Education.