When I first looked at exploring human rights issues in my grade nine English class, I struggled with finding the right medium to help my students to dig deeply. The idea behind using slam poetry came from my student teacher, Andrew. Andrew believed that the personal stories of those directly affected by things like unfair laws, tragedies, and war would most help students understand human rights and why they are integral to our world. As students began to explore the personal stories of local slam poets, the project evolved from looking at human rights issues in our world, to looking introspectively at the issues existing in our own community here in Manitoba – looking at how pre-set notions of “the ideal” have resulted in bullying and sexism in our own community.

To foster their exploration of human rights, Andrew and I first had to create a safe space where students could openly express their ideas, attitudes, beliefs, and opinions without judgment. We began with the verbal proclamation that we, as a class, will enter this unit under the assumption that anything said was coming from a good place, and acknowledging that people have different – and distinct – voices and ideas. It wasn’t until the safe place was created that we could really delve into the content. We played audio clips for the students and read them selections of poetry presenting very personal stories. The class was silent, reflective.

Since slam poetry relies heavily on performance, the class watched video clips of the award winning poet, Anis Mojgani, whose work was accessible and relatable to our young audience. The students connected with the messages in his pieces right away. We could see it in their written reflections and in the conversations they had. Once we introduced students to the form of spoken poetry, we introduced them to a variety of poetry techniques such as similes, metaphors, theme, mood, rhythm, and tone. 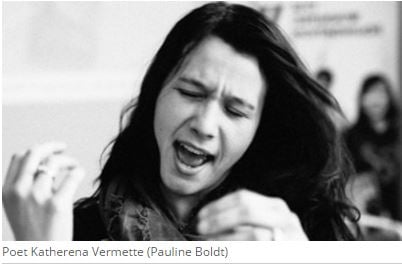 Last week we read a poem by Métis poet, Katherena Vermette, about the loss of her brother during her teenage years and the lack of official support her family received when attempting to locate him. The students were reflective and engaged, making connections to Canada’s Indian Act and further comparisons between the Indian Act and the Apartheid laws of South Africa. Students respectfully shared their views, ideas, and feelings on the subject, with a few tearing up during the discussion. When we approached them later, they explained that in this space, in our class, they felt validated. They felt that the voices of their lost family members were being heard. There is so much power in that.

Eventually, the students were asked to create their own slam poetry pieces, exploring – and in some places, exposing – issues important to them. Through their performances, I discovered that these kids had important things to say. There was strength in their messages. They used body language and voice to portray their emotions – to deliver their messages with power, while giving power to their messages. There was power in the injustices that they set out to expose in their pieces.

“The weed inside my mind only grew… until I became a mixed drink cocktail, one part anorexic and two parts lonely because I thought the definition of feminine began with the word frail...

“Women have reached many of the same great summits as man but we’re still climbing the mountain to reach gender equality… this is the truth.” –A.E.

“They can’t keep up. Stripped of everything, they suffer… the bottom of the food chain, meat we prey upon like savage animals trying to bring them down... When will you see that man on the street living in a cardboard box? When will you open your narrow mind and see others around you? When will you see the little girl who shivers because she has no coat, or the family that slave at work every day and every hour just for a loaf of bread? Will you ever see?” –M.D.

While a traditional research paper or presentation will give the students a factual understanding of human rights, it fails to bring forth the emotional and very personal impact that these issues have – it fails to make the issues human. Performance poetry lends itself to the development of other skills: analysis, public speaking, the exploration and expansion of ideas, and finding a voice.

These are grade nine students, 14 and 15 years old. They are in the throes of self-discovery, figuring out who they really are as members of society and where they fit into the grand scheme of things. Providing a safe medium for them to express their own opinions and to question how they feel about certain topics and issues will help them to become introspective people and grow into their own individuality.

How do you use poetry in your classroom?