Home > Our Blogs > Facing Canada > History and Action: Education for Truth and Reconciliation

This year has brought a lot of change to my classroom - for one, it’s in a new school! I started the year at Central Toronto Academy (CTA) in downtown Toronto. It has been a fantastic experience working with the staff and getting to know a whole new group of students. I was particularly excited to bring Facing History and Ourselves into a new school and see how it was picked up by students unfamiliar with the organization and it's pedagogy. Since the Genocide and Crimes Against Humanity course is not offered at CTA, my main focus of implementation has been through Grade 10 Canadian history. The main focus in the course has been on the treatment of Indigenous people by the Government of Canada and the very important topic of reconciliation.

After working through identity (both personal and Canadian) and memb 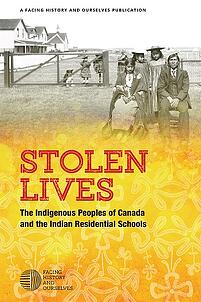 ership, we started learning about Canadian history, in particular, the case study of the relationship between Indigenous people and the settler population. We studied this history by focusing on the Indian Residential School system using Facing History’s new resource, “Stolen Lives: The Indigenous Peoples of Canada and the Indian Residential Schools”. This case study was contextualized by examining topics such as the mistreatment of Indigenous people during and after the World Wars, the pass system, the White Paper, the Meech Lake and Charlottetown Accords, the Oka Crisis, the Nisga’a treaty, the 2008 apology, Idle No More, and the Truth and Reconciliation Commission. The hope was that students would see the patterns of mistreatment, the history of racism, isolation, and destruction, and eventually, the possibility for reconciliation through choosing to think and act differently. 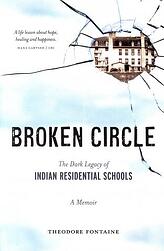 that I hoped would come from this process. The first of these moments was the incredible opportunity to have Theodore Fontaine, author of "Broken Circle: The Dark Legacy of Indian Residential Schools," in my classroom sharing his story with my students. His testimony brought home not only the closeness of the terrible abuse of Indigenous people in Canada, but the abuse of a child and the long lasting, inter-generational impacts of that abuse. I just typed and re-typed a ton of different sentences. None of them seemed to say it right, so I settled on this one: the depth of his impact is indescribable.

The following are excerpts from my student’s reflections and letters to Theodore:

Mr Fontaine’s testimony challenged what I previously thought about Indigenous People because at first I thought they were just overreacting...but then I heard the testimony and I realized there was so much more to the story, and all of the horrible stuff happened to them that wasn’t acknowledged. We have so much to make amends for... - Tamami N.

I like how he talked about his childhood and how he learned to take care of himself and it was sad it was taken away... - Ricky C. 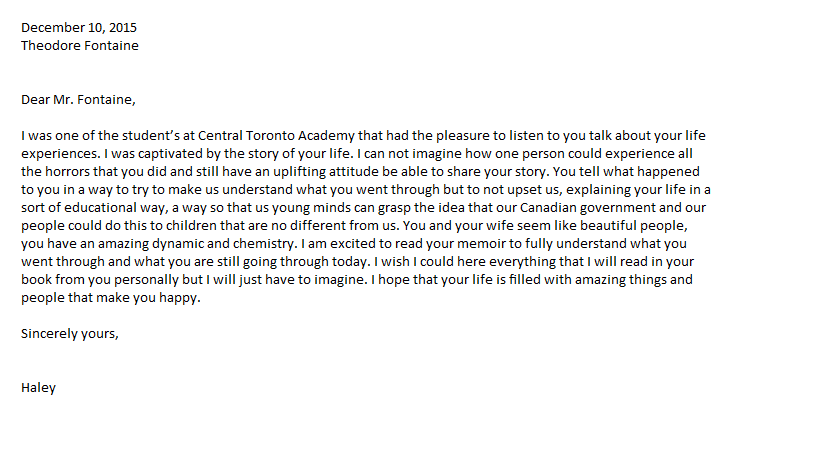 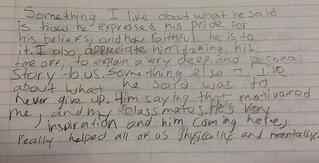 In Facing History pedagogy, the step following exploring the historical case study is choosing to participate - becoming an agent of civic participation and change. For this, we had the amazing Cheryl Payne-Stevens from Facing History and Ourselves come into our classroom for what we are tentatively calling a “Twitter Bomb.” This focused on having students learn about, and take ownership of, the Truth and Reconciliation Commission’s calls to action.

Here are some examples of what they came up with: 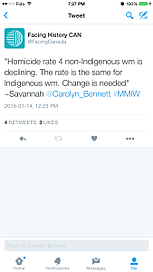 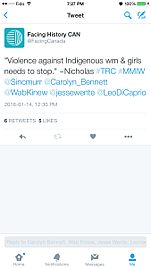 This focus on the relationship between the government of Canada and Indigenous Peoples engaged my students and created a understanding of the relevance and immediacy of this history in our lives today, and the need to act now to ensure the future is better.

How have you integrated deeper learning about Indigenous Peoples into your history classroom?

How have you used “Stolen Lives” to support this work?

If you are interested in learning more about "Stolen Lives" and strategies for teaching this difficult history, check out this seminar on February 7th!