Before I begin, I have learned from Elders that I should situate myself and describe how I came to this work. My name is Desmond Wong and I am a guest in Tsi Tkaron:tó (Toronto). I trace my ancestry back from Hong Kong and China but I grew up in Markham, Ontario. I am a librarian at the Ontario Institute for Studies in Education and among my responsibilities, I purchase Indigenous Education resources. As a settler-librarian, I work with educators to bring these voices into classes. I have experience working within Indigenous communities, including with the Cree community in Oujé-Bougamou, Quebec. I continue to learn from Indigenous colleagues, Elders and leaders in Indigenous communities, who inform my work as a librarian.

Treaty Baby by Sara General (2016) – This resource describes treaty relationships in a manner that is understandable to students in Kindergarten and primary grade classes. It is a wonderful introductory resource to the importance of maintaining treaties with Indigenous peoples.

When we were Alone by David Alexander Robertson; Illustrated by Julie Flett (2016) – This is a story about a girl who notices one day how her Grandmother valued her traditions and her family. When she asks her Grandmother about it, she is told about Residential Schools and how students in those schools were not allowed to be with their families, speak their languages or live in their traditional ways.

Coyote Columbus Story by Thomas King; Illustrated by William Kent Monkman (2007) – This book is a Trickster Tale about Coyote, who created the world, and her meeting with a peculiar man named Columbus. This story is especially compelling because it offers an Indigenous perspective on the arrival of European settlers and offers an Indigenous viewpoint in a format that is fun and easy for younger students to understand. As an added bonus, the book is illustrated by renowned Cree artist, Kent Monkman.

The Water Walker by Joanne Robertson (2017) – The Water Walker details the journey of Anishinaabe Nokomis (Grandmother) Josephine Mandamin as she walks from the Oceans to Lake Superior to challenge humanity to protect nibi (Water). This resource is an early introduction to Indigenous environmental stewardship and resistance against destructive uses of Earth’s precious resources.

Treaty Tales Trilogy by Betty Lynxleg; Illustrated by Scott B. Henderson and Amber Green (2015) – This trilogy centres on the main character Neepin, learning from her Grandmother about treaties and their importance to Indigenous peoples. Along the way, she not only learns about the history of treaties but also lessons about friendship and respect. The trilogy consists of three titles: The Handshake and the Pipe, The Friendship and We Are All Treaty People.

I am not a Number by Jenny Kay Dupuis; Illustrated by Gillian Newland (2016) – In this book, which is based on the experiences of the author’s Grandmother, the main character Irene is forced to leave her family and go to Residential School. There, she is forbidden from speaking her language, and only referred to as a number. This is a frank portrayal of the abuse suffered by survivors of Residential Schools and is an important conversation starter for students.

The Rebel: Gabriel Dumont by David Alexander Robertson and Andrew Lodwick (2015) – Follow the main character Tyrese and his friends as they learn about the history of the great Métis leader Gabriel Dumont. This culminates in the Battle of Batoche in Saskatchewan, which is an important event in the formation of the Métis Nation. This title is part of a seven-part series Tales from Big Spirit. 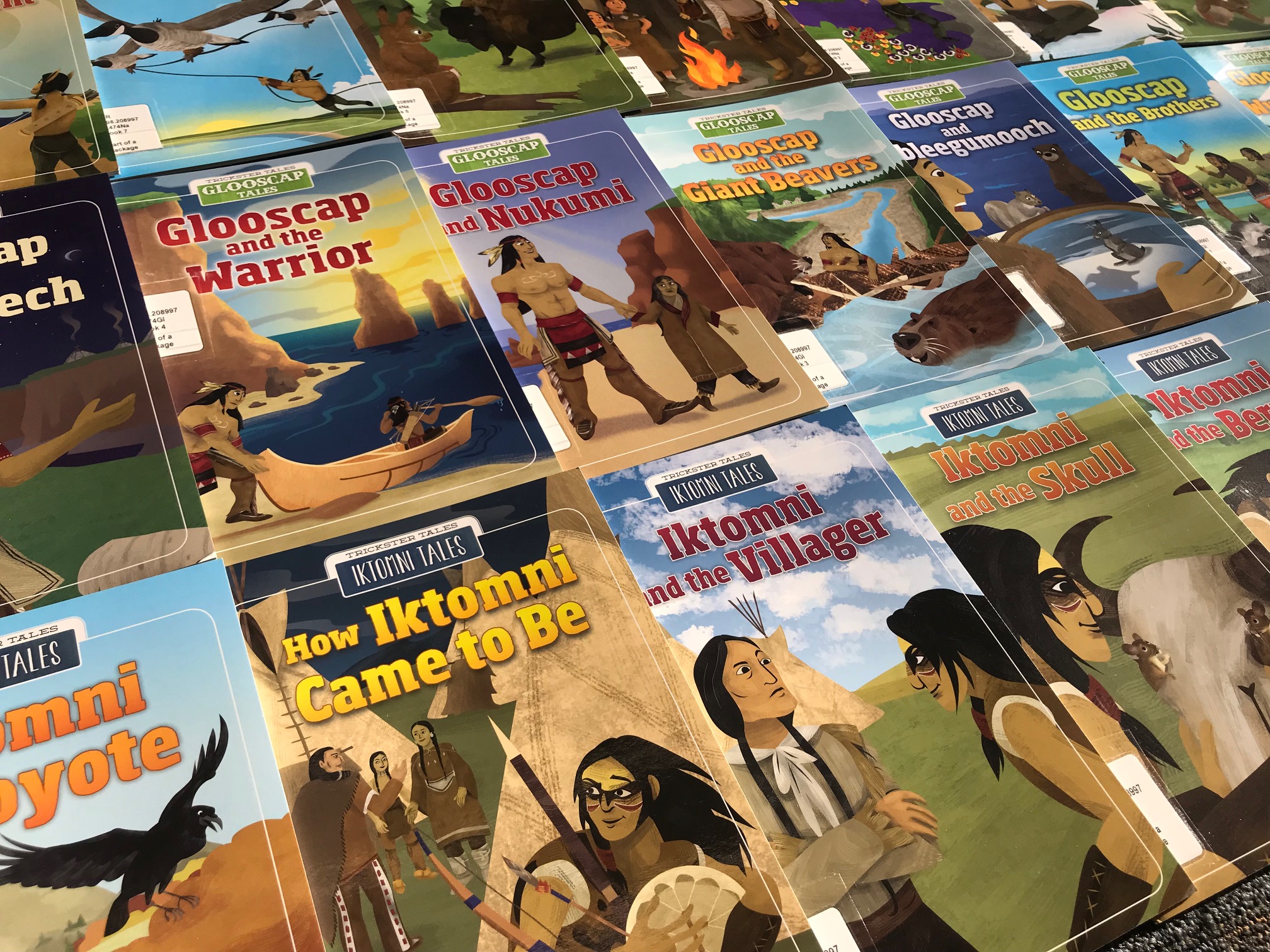 Trickster Tales Series by Various Authors, Scholastic Canada (2016) – This series of levelled readers covers the tradition of trickster tales across many communities in Canada. They are written with Elders or community leaders from the communities from which these stories originate. There are also teacher cards that are available that instruct on cultural sensitivities and how to teach these stories in an appropriate way.

Call of the Fiddle by Wilfred Burton and Anne Patton; Michif Translation by Norman Fleury; Illustrated by Sherry Farrell Raclette (2011) – This story follows the journey of a young Métis boy to embrace his culture and heritage, especially through music and dancing. There is a Michif version of the text, bringing readers closer to the traditions and characters in the book.

How Things Came to Be: Inuit Stories of Creation by Rachel and Sean Qitsualik; Illustrated by Emily Fiegenschuh and Patricia Ann Lewis-MacDougall (2014) – Covering important aspects of the Inuit Creation Stories, readers are invited to learn about Inuit worldviews through a collection of nine stories. Each story begins and ends with an explanation of how these stories are applied to worldviews in a practical manner, paired with illustrations to excite the imaginations of students.

Fatty Legs by Christy Jordan-Fenton and Margaret Pokiak-Fenton; Illustrated by Liz Amini-Holmes (2010) – This is a first person account of author Margaret Pokiak’s time in Residential School. The story is a lesson in human dignity and compassion in the face of cruelty.

Nation to Nation: A Resource on Treaties in Ontario by the Union of Ontario Indians; Edited by Maurice Switzer (2013) – This is a useful senior grade resource on the nation to nation framework that marks Indigenous peoples’ relationship with the Government of Canada. It also features information regarding the background of treaties, the history behind them and their importance to Indigenous peoples. Importantly, this resource focuses on treaty relationships from an Indigenous perspective.

Louis Riel: A Comic Strip Biography by Chester Brown (2006) – Although this resource was not written by an Indigenous author, Brown meticulously researched the life of Louis Riel. Riel, who is one of the founders of the modern Métis Nation, is seen defending the rights of the Métis in Red River in what is now Manitoba. Throughout the story, readers can also see the formation of a distinct Métis identity during its birth as a distinct national entity.

Stories of Road Allowance People by Maria Campbell (1995) – This is a collection of stories from lii vyeu (Métis Elders). It is a cherished and celebrated series of traditional stories that give voice to the Métis and acknowledges their past as living in communities affected heavily by road allowances.

Love Beyond Body, Space and Time edited by Hope Nicholson (2016) – This is an anthology of Indigenous Science Fiction stories that heavily feature Two-Spirit and LGBT Indigenous characters. This anthology offers an alternative understanding of the genre of Science Fiction through the lenses of Two-Spirit writers, including Gwen Benaway and Nathan Niigan Noodin Adler.

(This is a collection of stories with Indigenous characters. In the introduction, the author describes the importance of stories in traditional cultures for Indigenous peoples)

(This is a resource for students with descriptions of treaties in Ontario. This book contains the history of the treaties and their importance to Indigenous Nations.)

(This book presents a view of a Gwitch’in community in the contemporary period. The story follows the author and her family but also offers reflections on a traditional way of life. The text is also presented in the Gwitch’in language.)

If you bring stories of Indigenous identity and the history and legacies of Indian Residential Schools into your classroom:

Desmond is a settler librarian living and working on Mississauga of the New Credit First Nation land. He is the Outreach Librarian and works with the Indigenous and International communities at the University of Toronto. He works to make libraries a more inclusive space for marginalized peoples who may not see the library as a resource in solidarity for Black, Indigenous and People of Colour.