Home > Our Blogs > Facing Canada > Indigenous Cultures, Language, and the TRC through an Anthropological Lens (Part 2)

Indigenous Cultures, Language, and the TRC through an Anthropological Lens (Part 2) 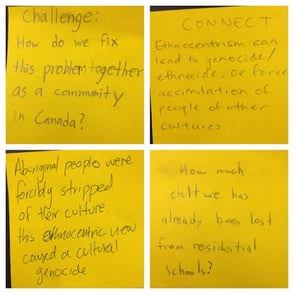 Throughout the unit we had students critically reflect at the

end of each lesson on what was covered and fill out a Connect- Extend- Challenge worksheet. This activity extends beyond the traditional K-W-L chart as students reflect upon previous learning, using it to foster further discussion and guide inquiry. To launch our critical challenge, we had students using stickies post their top responses from each category on the chalkboard. Our discussion centered around the challenges students were grappling with. Many students commented on the difficulty of coming to terms with past injustices and striving for concrete action.This led to an evaluation and analysis of the Federal Government’s apology and whether or not that constitutes action; whether it can be used to aid in the process of reconciliation.


Beginning in small groups, and then coming together as a class, we co-constructed criteria for a good apology. Students identified key aspects such as the need for authenticity and a plan for action. After creating a master criteria list of the top 4 items, students then viewed and read Stephen Harper’s apology. In small groups, they used the criteria to understand whether or not the apology should be considered “good.” Student’s really wrestled with two major aspects: the background of the apology (can it be considered authentic or sincere if it was given as a result of a court case), and the lack of action that came as a result of it. They grappled with Harper’s later words, denouncing any history to colonialism, and whether or not the government’s inaction and denial of this painful history not long after the apology ruined any impact of change this moment may have caused.


All this was geared towards inspiring action in our students. We wanted students to recognize that understanding the past was only part of the solution- they needed to begin to change the future. We had students reflect on the following quotation from John Ralston Saul; “I think that if you insist on sympathy you’re trying to avoid action, and that’s when I say it becomes a new form of racism.” Students discussed that sympathy makes themselves feel better, but does nothing to solve the situation. That if they stand by knowingly allowing the situation to continue, then they become bystanders allowing the perpetuation of systemic racism, which means they share in the responsibility. Sympathy, or empathy as many of the students argued was only a first step towards action. It was from this understanding that we launched into our TRC Rant assignment.


For this critical challenge students were called to use their own voice to call for change. The challenge was 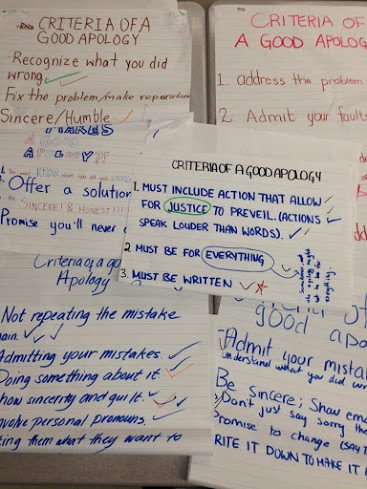 centred around the idea that via social media, even high school students have a powerful platform to affect social change. They key is to find a way to get noticed and to have a clear and meaningful message. In groups of two, students examined the Truth and Reconciliation Commissions 94 Calls to Action, and chose one recommendation that they believed most needed to be addressed. After viewing exemplars of Rick Mercer Rants on YouTube, student brainstormed the elements of a good rant. As a class, we co-constructed success criteria for our rant assignment. As a result, our students better understood how to use creativity, humor, and satire to catch the attention of others. The challenge truly began when they had to turn this understanding and their ideas into a product for others to view. Students were given class time to write scripts mimicking Mercer’s style, informing fellow Canadians of the issue and specifically calling people or the government to action. Students filmed their rants, using their own cellphones, and issued a clear call to action for both individuals and the government. In the end, students produced and posted on YouTube a 60 to 90 second video which were used as the basis for a class “Twitter Bomb.” As a class we brainstormed individuals on social media who had the platform, voice or power to reach a large audience and influence the government to action. After identifying the three most impactful individuals to tag, students actively “Twitter Bombed” the individuals with calls to action, and their Rants for change incorporating the hashtag #reconiliACTION.


Our aim, not only in this critical challenge, but throughout the entire course was to help students develop the skill sets needed to be socially conscious and active members of Canadian society. Learning various social science disciplines provides a framework to not only understand our communities, our nation, and our world, but to be to have the confidence and the ability to be active within and to help shape Canada into a country we can be proud of. We wanted our students to realize that through exploration, understanding, taking ownership and realizing the power of your voice, creating change is possible. They have the ability to be heard and what they say does matter. This is the enduring understanding that we wanted our students to leave with more than anything else.


How have you helped students connect with issues outside of the school community?

Mike is a secondary school teacher in Mississauga with the Peel District School Board. He teaches history, civics and social science. Mike strives to embed inquiry based learning and critical thinking into his courses. Mike is passionate about finding creative ways to use role playing, simulations and 21st Century technology to encourage civic engagement and action. Follow him on twitter @ItsMrMElias.​