For a very long time, this seemed like the perfect text to bring into my grade 10 history classroom - it is the best fictional account of life in the World War I trenches that I’ve encountered, and it delves into the difficulties that soldiers faced when they tried to re-acclimate to civilian life upon return from the war. It also serves as a great introduction to the horrors that occurred in residential schools, which I pick up on with my students in our unit on the 1920s. Above all, this novel offers these experiences from an indigenous perspective, which is a voice I find is often missing from narratives of World War I that are brought into the classroom. I thought I had found the perfect text, that is, until the fall of 2016.

In October of 2016, Jorge Barrera published an article in the APTN National News calling into question Joseph Boyden’s indigenous identity. Over the next several months, Boyden’s identity was debated in our national news. Prominent indigenous writers Wab Kinew and Hayden King added their voices to the conversation. The rumours and discussion about Boyden’s identity continued until Boyden himself added his perspective around his identity, and by extension, the authenticity of his works of fiction. The ultimate question remained - does Boyden have the right to be writing from the indigenous perspective when he has been claiming to be indigenous himself?

My initial reaction to this question was “no, absolutely not!”. Because of this, I stopped using his work in my history class. If part of what I teach is for students to be critical of their sources, how could I continue presenting Boyden’s work as representative of indigenous experiences with trauma if he is not indigenous? Towards the end of the summer however I thought this would be an interesting question to bring to my grade 11 and 12 English students. 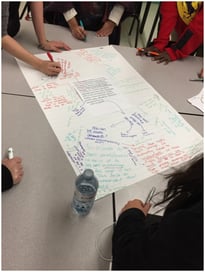 The theme for my combined grade 11/12 university-level English class this semester was authorship and identity. We questioned where an author’s identity ends and their work of fiction begins. In order to facilitate our class discussions, I used many Facing History teaching strategies, including annotating and paraphrasing, big paper, and save the last word for me to help students have nuanced discussions about the texts they were reading.

After reading some of Joseph Boyden’s short stories (some of my students even read Three Day Road), along with the work of Desmond Cole, Audre Lorde, Drew Hadyen Taylor, Chimamanda Adiche, and many others, we decided that while it is important to understand where an author comes from, ultimately their works of fiction can be just that - fiction. When it comes to Joseph Boyden however, the students argued that the main issue is that he passed himself off as indigenous when he is not. This was a form of appropriation that didn’t sit right with many of them. If, however, we look at the world of Xavier and Niska as a made-up portrayal of the lives of characters, this work has a place in our classroom.

The moral of the story for me? I think I will re-introduce excerpts from Three Day Road into my history curriculum next semester, but will use the dilemma of Boyden’s identity as a lesson in being critical of your sources and about what reconciliation truly means to the Canada of 2018.

Invite students to dive into  Indigenous peoples' contributions to Canada's wars here https://www.aadnc-aandc.gc.ca/eng/1414152378639/1414152548341
Learn more about decorated soldiers such as Ojibwe sniper (and "the deadliest sniper of WWI) Francis Pegahmagabow at the CBC's "Our Stories" archive, or Inuk soldier John Shiwak at the  Virtual Canadian War Memorial.

What interesting discussions have you had with your classes around cultural appropriation, source choices, and/or Joseph Boyden? Please share with us in the comments!

Leah Mauer has been teaching with the TDSB for six and a half years. She currently teaches at Agincourt Collegiate Institute. Leah teaches history, drama, and English, and is an avid reader and chocoholic.