I wear a p

endant around my neck. It’s about the size of a quarter and it has the silhouette of a solitary candle carved out of the middle. Written around the candle are the words Remember and Never Again. It’s a simple, yet powerful design. A student, noticing this, asked me why I often wore it and what it meant. Instead of answering the question directly, I turned it back to her. I told her that a friend of mine had bought it for me at the United States Holocaust Memorial Museum in Washington D.C. and I asked her why we study the Holocaust. Why do we need to remember?

As an educator, I sometimes find it difficult to engage students in a topic in which I do not have all the answers.

I cannot tell them why the Holocaust happened and I cannot promise that a similar tragedy will never happen again. What I can do is foster empathy and guide them through the emotional journey that comes with facing difficult histories. I think, as human beings, we try to make sense of the illogical. We try to compartmentalize it. We even try to humanize it. But we will never completely understand it.

We have a responsibility, as educators, to guide our students in their learning, and more often than not, they teach us so much. Our students can be incredibly insightful; they understand so much more about the world (and humanity) than we sometimes give them credit for. Sometimes we just have to provide the proper medium for them to explore their ideas. 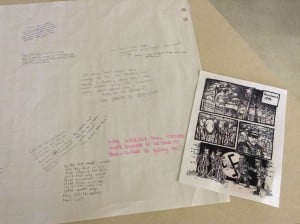 I recently used a variation of the big paper activity with my grade 11 English class. We had just completed a study of Night by Elie Wiesel and I wanted them to reflect upon the ideas and concepts that we had discussed as we read the book and I wanted them to deconstruct the content and history that we had been immersed in for weeks. I knew that they still had so many unanswered questions and ideas. I also understood that they are teenagers and that they are sometimes shy or uncomfortable speaking their minds (especially if they feel that their ideas or opinions might somehow be viewed as wrong).

To prepare, I placed several sheets of big paper around the room. With 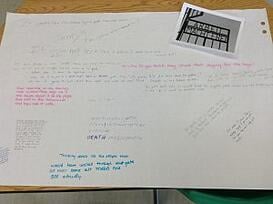 each sheet I included a quote, a photograph, an article, or a drawing centering on the Holocaust. As the students entered the classroom, I instructed them to remain silent and to move to a station of their choosing. Once each student had selected a station, I asked them to reflect on the piece provided and record their thoughts, questions, and ideas on the big sheet of paper. They were not permitted to use their voices at all. The silence – the absence of distraction – provided a terrific time for reflection and focus. The students had approximately five minutes to spend at a station before moving to another to repeat the process. They did this until each student had visited each station.

The results were incredibly powerful. The students engaged in some very genuine dialogue about what they had learned. 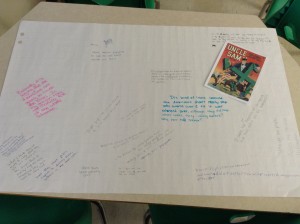 They asked questions and they answered questions. They valued one another’s opinion. They helped one another deconstruct myths and to attempt to understand the why. They left feeling empowered that day. They left in silence, each student still reflecting on what they had seen and read. The next day we spent a good portion of the class discussing some of their ideas. These normally quiet and reserved students found their voices. They were ready to share their ideas more openly. Together, we created a safe space to talk, to feel, to express, and to take action. Together we found the reason to remember.

Last Monday marked Yom Ha'Shoah, a day of remembrance for the six million Jews who were brutally murdered during the Holocaust. There is so much value inherent in learning about the Holocaust, in remembering the victims of one of humanity’s greatest tragedies. There is so much that we can learn – so much that we can feel. We remember because history is very much a part of us; we remember to avoid a repeat of the terrible histories that plague the fabric of modern civilization. We remember to understand, but most of all, we remember because we are human; we remember out of respect.

The biggest question students ask is, “What does this history have to do with me?”

I wear my pendant as a tangible reminder of the brutal history that affected, in my opinion, all of humanity; I wear it to remind myself to make sure that the victims and their stories are not forgotten.

What do you use to remind you of the why? How do you engage your students with the content so that their voices are heard?

Check out these resources for teaching the history of the Holocaust in your classroom: 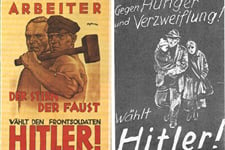 Study the history of the Weimar Republic and the fragility of democracy.

Learn about the diplomats who chose to rescue Jews during the Holocaust. 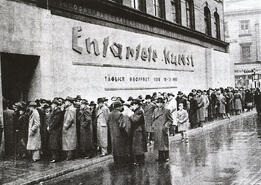 Learn about Nazi propaganda and the Degenerate Art Exhibit with Dr. Jonathan Petropoulos.