This series of blog posts explores stories and teachings that Lorrie Gallant shares about the purpose and importance of territorial acknowledgments and treaties with a particular focus on the Dish with One Spoon Wampum. They are based on a recorded webinar from March 18 2020. Lorrie is a writer, illustrator, storyteller, visual artist, educator, Expressive Arts Practitioner, born and raised on Six Nations of the Grand River Territory in Ontario.

These posts and activities have been written for students to explore as part of an in person, hybrid or virtual learning community.


This lesson explores the Dish with One Spoon Wampum, a formal peace agreement between the Anishinaabe Three Fires Confederacy (Ojibwe, Odawa and Potawatomi Nations) and Haudenosaunee Confederacies that extends to all those who arrived to the area around the Great Lakes region and along the St. Lawrence River. 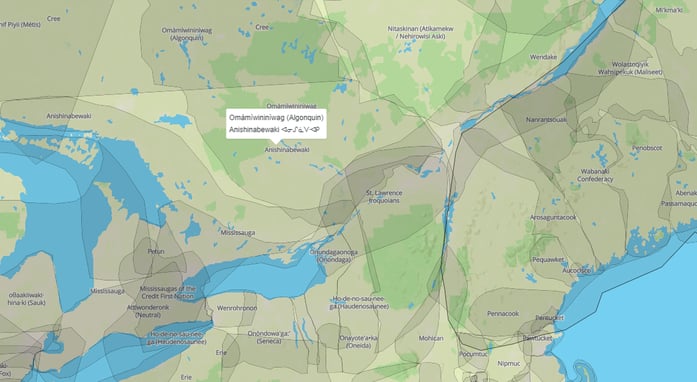 Map representing the overlapping territories of the Anishinabek Nations (and Haudenosaunee Nations surrounding the Great Lakes region and the St Lawrence River.

In this first activity, you will be thinking about the kinds of agreements you have made and the role they play in the relationships you hold.

In your journal, reflect on the following questions. Then, take a moment to discuss your answers to the following questions with a partner, or in a small group.
(i.e. via Padlet, Google Hangout, Microsoft Team, Google Classroom thread or during an in-person “Walk and talk”: Based on Kasha Kikkert Duff’s “Walking Wednesdays”)

Part A: Reflecting on Personal Relationships and Agreements

Part B: Reflecting on Our Relationships as a Society

Let’s take a step back as we think more broadly about the important agreements and the legal obligations that a community (for example, school community, neighbourhood, town or city) has.

As a class, discuss the following concepts and questions:

1. Sociologist Helen Fein coined the term 'universe of obligation' to describe the circle of individuals and groups within a society “toward whom obligations are owed, to whom rules apply, and whose injuries call for amends.” As you will watch in the video below, Lorrie herself added 7 generations forward and back, as well as all living things - not just people - when she filled in the universe of obligation. 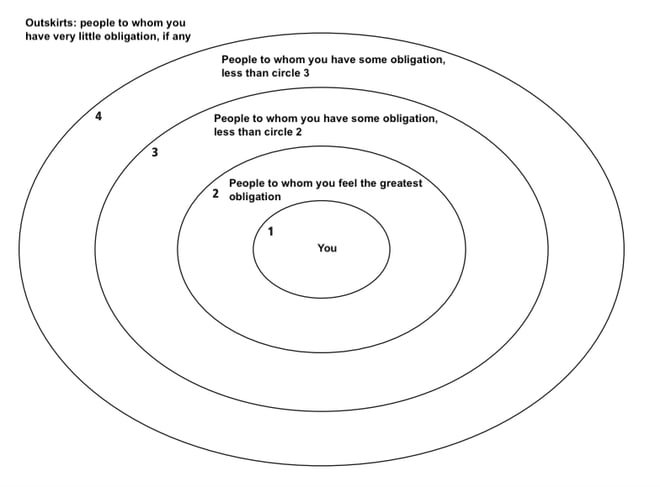 2. In “Nokomis and the Law in the Gift”, Aaron Mills, Canada Research Chair on Indigenous Constitutionalism and Philosophy at the University of McGill writes,

“There’s a powerful word in Anishinaabemowin  that grounds this vision of treaty and this entire discussion: miinigowiziwin… As individuals, none of us has all the gifts necessary for a good life, minobimaadiziwin; each of us depends on the gifts of others.  This is true not just of the sacred gifts… but also of the more mundane gifts the average day calls upon: sacrifice, care, labour, knowledge, skills and abilities...Therefore it’s necessary, for creation to continue, that different kinds of beings (including different human societies) vary as much as we do.... Gete-Anishinaabe Ken Courchene says: 'look at how we sat in a circle.  All differently.  We got to sit in this way.  Everyone is different and yet equal.  And we always had that belief, that difference is not to segregate someone [as] higher or lower.’”1

Explainer:  What are Treaties?

As stated in The First Nations, Metis and Inuit Education of Ontario in ‘Pedagogical Considerations for Treaty Education’:

“The intent of Treaties at the time of their negotiation was the protection and retention of rights to languages, ways of life, and existing belief systems. This undertaking is part of the original understanding of Treaty processes as ongoing relationships that are dynamic and adaptable.

Treaties were about retaining a way of life that included hunting, fishing, and gathering, as well as a relationship to the land that existed for thousands of years prior to the arrival of Europeans. According to First Nations signatories of the Treaties, as well as to Knowledge Keepers today, the land and everything on it is alive.”

According to Anishinaabe Elder Harry Bone in the radio series Let’s Talk Treaty, “Treaties are part of the first law — the constitution of First Nations — that involves the idea of entering into peaceful arrangements with newcomers on an equal, nation-to-nation basis.”

One example of a treaty between nations is the Dish With One Spoon Wampum which you will learn more about in the following video.

View the video below.  While watching, write down 1 quote that stands out to you and in your journal, explain why you chose it. Be prepared to discuss with classmates:

Here Lorrie shares some of the teachings she carries about living treaties and the ways in which treaties connect to territorial acknowledgements.

“The symbolism [of the Dish With One Spoon Wampum] was you never take more than you need and you always make sure there is something left for the next person.” -Lorrie Gallant


Understanding the Origins of the Dish With One Spoon Wampum

As described by Well Living House, The Dish With One Spoon Wampum is a “mutually beneficial [agreement]” that “was designed to create peaceful hunting conditions for nations in close proximity to each other.”

"The Dish With One Spoon Wampum uses purple and white beads that represent friendship and peace. The purple 'dish' represents the Continent (Turtle Island) and all the different Nations. The white centre represents the tail of a beaver, or the resources of Turtle Island. Nations are only to eat from the dish with one spoon, meaning that resources should be shared, each territory should be respected and nations will not war with each other for the domination of the resources. This is symbolized by removing the presence of a knife with the dish and spoon.

While The Dish with One Spoon was established long before settlers arrived, it was expected that everyone that came to the region would abide by its rules and acknowledge the existence, history and integrity of the agreement. Instead of a shared commitment to the land, settlers conquered and took ownership over the land and it's resources. This is an ongoing living agreement." - Lorrie Gallant

After viewing the video, reflect on the following connection questions in your journal and then with a partner (i.e. via Padlet, Google Hangout, Microsoft Team, Google Classroom thread or during an in-person “Walk and talk”: Based on Kasha Kikkert Duff’s “Walking Wednesdays”). Be prepared to share your learning with your class:

1. Take a moment to share with a classmate the quote from the video you chose to reflect on, and why you chose it.

2. The Dish with One Spoon Wampum is about sharing, caring for the land and ensuring enough resources for everyone, both in the present and future.

3. Senator Justice Murray Sinclair, Truth and Reconciliation Commissioner, explains that for (re)conciliation to happen, Canada will need to come to a right relationship with Indigenous peoples, communities and nations. To do this, Aaron Mills writes that Canadians must move beyond “simply making space for Indigenous voices...I want you to live as if what we say matters… I want you to respect--and that means live by-- Indigenous legalities as they exist within Indigenous constitutional orders."2

Activity 4. Reflecting On Your Learning (Private)

Privately journal your responses to the following questions:

To what degree do you share these same values?

To learn more about how treaties are turning up in current events:

This blog is co-written with Erez Zobary, Jasmine Wong and Lorrie Gallant.

Lorrie Gallant: I am married to a restaurateur which has many perks when I’m too busy to make dinner! I have two beautiful daughters, a creative and wonderful son-in-law and a gorgeous 7-month-old grandson named Cash. I am a writer, illustrator, storyteller, visual artist, educator, Expressive Arts Practitioner, born and raised on Six Nations of the Grand River Territory Ontario. I have written a series of children’s books, participated on many inter-generational projects, and art exhibitions that are all based on Indigenous community. I worked 11 years at Woodland Cultural Centre in Brantford Ontario (formerly the Mohawk Institute, the first residential school in Canada) as the Museum Education Coordinator where I developed art-based teachings and workshops to reveal the rich culture of the Haudenosaunee and the history and trauma of colonization and the residential school. Now I present workshops, and consult on these subjects for school boards, museums, educators and organizations who want to understand more and find ways to participate in the 94 calls to actions of Truth and Reconciliation./ Jasmine Wong: Jasmine Wong is a senior program associate for Facing History and Ourselves. She lives in Toronto and works with educators across Canada to provide professional learning, curriculum resources and support./ Erez Zobary: Erez Zobary is a Program Specialist at Facing History and Ourselves and holds a Bachelor of Arts and Education from Queen's University. Erez graduated as an English and History high school teacher with a specialization in social justice education and is passionate about empowering youth through engaging content. In addition to education, Erez is a musician and regularly performs and composes original music.