Home > Our Blogs > Facing Canada > "The Last Jew in Vinnitsa": How Media provides a way to understand Perpetrators/Bystanders/Victims

"The Last Jew in Vinnitsa": How Media provides a way to understand Perpetrators/Bystanders/Victims

Graphic imagery is used in this lesson. Please read the full post before teaching this.

I start by displaying the famous photo called "The Last Jew in Vinnitsa."

I say, "This was the title given by the Einsatzgrup soldier in whose pocket it was found, scribbled on the back. Vinnitsa is a small town in the Ukraine whose entire Jewish population was wiped out by the Einsatzgruppen mass killing methods in 1941."

This is all I tell my students when displaying this picture. They have already learned about the Einsatzgruppen and read the selection on "Battalion 101" in Holocaust and Human Behaviour Chapter 7 Reading 3 . They have also been taught that there are three groups involved in genocide: perpetrators, bystanders, and victims.

The class gasps as I flick on the image. I keep my voice level and didactic, but it is hard. I 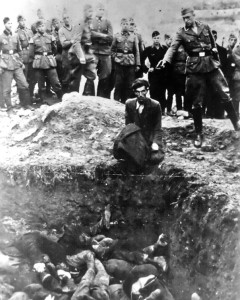 ask my students to follow the Facing History protocol and "write what you see". The silence is deafening--and my students are usually bubbling with conversation. When they are asked to report, they quickly supply a list of what might be "expected" (as if an image like this can be spoken about in such terms!): their are bodies, there is one man left, the perpetrator is about to pull the trigger, etc.

Invariably, when my students proceed to analyze what they see, one or more students comment: "the picture is POSED." When asked to supply evidence, in proper Crticial Thinking fashion, they cite the eyes of the other Einsatzgruppe members and the way they are standing in a staged way, almost "like a class picture." When asked what they learn from this (which by the way is correct) they reply: these people were proud of what they did." I ask them how this can be explained?? The class refers me back to their viewing and movie review of Triumph of the Will, in which they learned the power of propaganda. They suggest that perhaps, as Browning suggested, many of these men were indeed so influenced by propaganda and the power of the "in group" that they participated proudly--hence the photo.

The key part of the lesson is now at hand: I ask a student to come to the board and use three coloured markers to delineate the perpetrator9s), bystanders, and victims. The first student called will usually pick the soldier with the gun as the perpetrator, the man kneeling at the grave as the victim, and the rest as bystanders. And that is indeed the all too iconic and simple division which the picture lends itself to. But--and this is the Critical Question: is this the best grouping based on the available visual evidence??

Suddenly students search for a more nuanced view. Students especially argue over the role of the other soldiers who are watching the execution. Are they bystanders or perpetrators? Moments ago, didn't they all commit acts of genocide? This of course triggers a debate on the limits of photographic accuracy--the camera catches and captures the moment, but is that enough? (You can imagine all the interesting side discussions this can lead to but I will leave that to you.....) I once had a student tell me that the victim is also a bystander--who was forced to "stand by" while everyone else was murdered. After thinking about that powerful insight I then asked: "how do you separate this type of bystander from the others?" A very rich conversation developed.

For closure i ask the students to record one important idea they learned from another student in this discussion and how their original perceptions of the picture were altered by their peers' insights. In some classes I have asked them to write the diary of the man about to be executed of what transpired that day.

My students' bleak looks--still more filled with life than the victim's in this picture--upset me as they leave, but the visual image has done its work of knitting together their previous learning and moving it forward. I invite you to try this and let me know what happens.