As a middle school educator, I often find myself in the position of being unable to explore really rich resources with my class due to mature content. Several years ago I purchased 5 sets of the graphic novel MAUS, hoping to one day use it as an option for book talks. Every year I found myself uncomfortable with the idea of throwing the text out there for a group of even strong students to investigate.

I knew upon meeting my students this year, that this would be the class I would explore MAUS with. This year I felt my group could manage the topic, understand the form of the text, and think critically about the difficult issues that would come up. I was able to borrow a full class set from the Facing History library, a library that all Facing History teachers can access. Now I was faced with the task of leading my class through the text in a meaningful way.

I began the exploration in drama class while working through tableaus. One of the sources I used was the Anne Frank picture book. We explored the images first to decode what we felt was the theme of the text. We then read the story and reflected on the connections between Anne’s life and our own through identity maps. We created tableaus and movement pieces based on the themes and emotions presented in the text. The students were interested and wanted more information. Some of my students checked the Diary of Anne Frank and The Boy in the Striped Pajamas out of my class library.

In preparing for our exploration of MAUS I informed the students about the content of the text, showed them the text so we could explore the form, and I contacted parents. I wanted everyone to be aware of what we would be doing and why. Not being comfortable myself with graphic novels as a text form, I was overwhelmed by how to teach the students how to read the text. I admit, I procrastinated preparing for the read aloud. Before we started reading I did some pre teaching of Germany after the reparations, and the feelings at the time. I was surprised to find how interested they were in the topic.They feverishly took notes and asked questions. We eventually had to move on from WWII specifically, but the information that the students had learned was kept in mind in order to give more historical context to Maus.

I decided to keep the texts in the classroom and read the text together so we could discuss details as they came up. I organized the students in a circle and read aloud, pausing to review details. I wanted to be there to talk them through any issues or feelings that would arise. Many of the conversations revolved around questions and clarification if details revealed in the text could possibly be true. I do not think a class went by when a student didn’t ask, “is this really true?” even though they knew it was. There were times when I allowed the students to take home the text, and I am sure many of them read ahead, which only added to the conversations.Those students who read ahead, had often done additional research and could act as experts themselves. I found this very effective as it took me out of the conversation as the keeper of the information, and allowed us to simply talk.

The timing of the text coincided with the events in Paris, and the welcoming of Syrian refugees. This led to obvious connections and critical thinking. Our biggest area of discussion was about what makes some people help and others not. We discussed other tragedies/genocides, and after discussing Rwanda the students came to the conclusion that people can often be divided into three groups; those who helped, those who did nothing, and those who profited from the conflict. When discussing the connections between the Holocaust and current events, I really struggled with how to explain to the students why these events appear to be happening again.

During the exploration, students were given several tasks. They were given journal questions, activities where students were encouraged to take different perspectives, and source investigation. I tried to include additional resources to explore the themes presented in the text. For example, The story of Eve Shalen started a great conversation about what school “bullying” programs have done to combat bullying, but that the need for a sense of belonging is stronger than anything when you are young and finding your way, which often fuels bullying.

Our class theme for the year is community. Everything I do we bring back to a person's role within a community and/ or their impact on the community. We had a discussion regarding how a tragedy like the Holocaust tears a community apart, but also how some relationships between those who are persecuted can also be made stronger in these moments. One student reflected on the importance of the relationships formed between prisoners in the concentration camps that were depicted in the graphic novel, “It was based on trust and nothing else. There were no belongings, no status based on wealth or family name, only the trust of another human being.”

We also viewed the short video Pigeon and discussed why some people choose to help. Students made connections to how some people only give if they are going to get something out of it. We connected this to our school’s holiday food drive; in order to improve donations,participants were given candy. We were all disappointed to see that even today, many are only motivated to help if they will get something in return. What surprised me the most about this discussion though, was that we were unable to agree on a reason why the woman on the train helps.

After we completed the text, and students were working on their last journal questions, we watched the documentary PaperClips. This documentary explores how a grade 8 class from Virginia learns about the Holocaust, and how it changes their community. 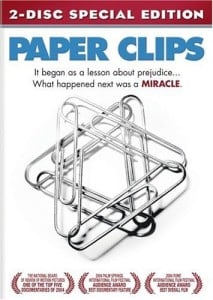 When we began watching the film, my class would giggle at how the students spoke, and how "ignorant" they were of world events. I stopped the film and we discussed how we are allowing our stereotypes to judge people we do not know, which is exactly what causes hatred. It was a great moment of self reflection for my students.

There are many things I will do differently if I am ever in the position to explore this text again with a group of students. The biggest area of learning would be to slow down. I feel that reading the text almost every day was too fast. They needed more time to reflect, more time to process everything that I was giving to them. I found even this week, over three weeks after we had finished reading the text, students were still putting concepts together and were able to better articulate their thinking. I also would have read their journals more often so I could engage in conversation with them along the lines of their own thinking through writing. I think more students would have felt comfortable speaking their mind during discussions had I acknowledge their feeling in their journals more frequently as we went along.

I hope my class will take what they have learned about this time in history, and, to quote one of my students, “to understand what happens when a government, community, or even a single person allows prejudice, racism, and stereotyping to guide their thinking. Maybe then ...finally...change will happen.”