Home > Our Blogs > Facing Canada > The Voice of Empowerment

The Voice of Empowerment

Posted by Cheryl Payne-Stevens on February 5, 2014

As a history teacher, I often struggle to help my students see the relevance of the past and understand the power it can wield in helping them to navigate the present. With this in mind, I began to plan my unit on the Armenian Genocide. This genocide occurred almost 100 years ago under the cloak of WWI in 1915, when the Ottoman government embarked upon the destruction of its Armenian population. I decided that to give voice to this genocide beyond readings and documentaries, I would invite a guest speaker from the Armenian community. I had the privilege of meeting Raffi Sarkissian of the Sara Corning Centre for Genocide Education the grandson of a survivor at The Holocaust and Human 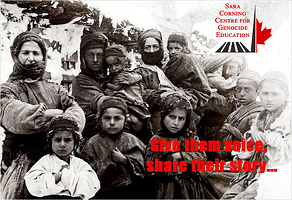 Behaviour Summer Seminar a few years before and hoped he would be able to meet and speak with my students. He graciously accepted our invitation and the date was set. What happened next though completely reaffirmed my belief in the power of a guest speaker to transform a person.

The weekend before Mr. Sarkissian’s visit, Doug Saunders, a journalist with The Globe and Mail published this article questioning whether The Armenian Genocide was really a genocide. The Turkish government does not recognize the Armenian Genocide and Doug Saunders asserts that if the label of “genocide” was dropped, that both the Armenians and Turkish people could find a way to reconciliation. Saunders acknowledges though that “It feels petty and mean to tell people whose family histories have been defined by cruelty and loss that the atrocities they suffered weren’t quite up to the definition of genocide.” I knew that Mr. Sarkissian planned to speak to the class regarding the legacy of the Armenian Genocide but now I was also interested in his reaction to the article. I was shocked and angered by Saunders’ article so I could only imagine his reaction!

Mr. Sarkissian and I briefly met before his presentation and he agreed to discuss the article. What happened next was inspiring. Yes, he spoke of the intricacies of the Armenian Genocide but he also brought the devastating impact of denial to the forefront in this 21st century classroom. Denial wasn’t just something we learned in class that day. Denial now had a face and he was standing right in front of us. Survivors of genocide and their family members talk about how denial is a “double killing.” First, there is the destruction of a people and then its subsequent denial destroys the voice, the memory and legacy of the victims. It is one thing to discuss this with the class but the concept and impact of denial became much more tangible when Mr. Sarksissian told the class that denial still follows his family.

For the class, this visit was one of the highlights of the year. Not only did they understand the complexities of the Armenian genocide in greater depth but they understood that denial wasn’t just something that happens in Turkey, or something that happens in some other part of the world but that denial happens right here in Canada. In fact, in one of our national newspapers.

One of the most enduring lessons (and there were several) during this presentation was what to do in the face of denial. Mr. Sarkissian told the class how he respectfully challenged The Globe and Mail,  asking for a retraction of their article, and/or allowing him to write a response that would be published. Although this request was denied, Mr. Sarkissian insisted and was eventually asked to write an article for the Opinion section addressing the issue of denial. This article was published and is proudly in the binders of all of my students. Here was an upstander who visited our class and his defence of The Armenian Genocide was published in a national newspaper. The students were inspired! In response, several students made the choice to participate and write their own letters to the editor of The Globe and Mail as their culminating activity for the unit.

I cannot reiterate the importance of bringing guest speakers into your classroom. The issue of denial became personal for my students, they realized that the act of denial isn’t something that happens somewhere else but can happen right here, and most importantly that day, Mr. Sarkissian gave them the courage to realize they have a voice – a powerful voice that can challenge denial and create meaningful change.

Facing History and Ourselves believes in the deep learning that a witness to history can bring to the classroom. Connecting you with one is a service Facing History provides to qualifying educators.

How have guest speakers inspired learning in your classroom? What has inspired your students to choose to participate?

Cheryl Payne-Stevens is a highschool history teacher with the Peel District School Board. Social justice is an integral thread in her courses and she tries to provide students with opportunities to become agents of change. She is always looking to try new strategies and resources in the classroom. She is excited to share her ideas and learn from you!