Too much knowledge is NOT a good thing

My Grade 8 students love their smartphones and computers. One of the most important jobs I have is to teach my students how to "curate" what's out there. My 20 year old son who takes Advertising at OCAD taught me the new meaning of this old word. "Curate" conjures up visions of dusty museum cases and stuffed animals--right? Well, these have gone the way of the dodo, as have the old style museum exhibitions. You've seen the exciting new ways in which curators present information today, especially with the Royal Ontario Museum so close at hand. The new curators' challenge is to choose and organize what is out there to make the maximum impression on viewers bombarded by visual media. For us, that means teaching our students how not to drown in Google hits, how to separate the wheat from the chaff, and what sites are actually useful to them. 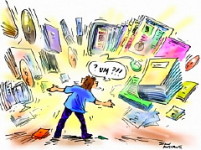 result. On the first day of History class, my hockey mad students chose "hockey stick" . Google quickly produced 25 million results in less than a second. I then told my students that back in the days when i went to school, or even when they were born (just!!) , the teacher and the textbook were the dispensers of knowledge. Now knowledge was much more democratic--wasn't that great? My students immediately complained that "there's too much out there!" "Can we just read Wikipedia?" "Do we have to go to the second page of search results?" This led to a very effective lesson that has really changed their habits--at least for my projects. At least i have met the challenge of "too much knowledge"--though I know it will be an ongoing endeavour.

But I have another issue with "too much knowledge". Whenever I mention the Holocaust, one of my class inevitably replies that they know all about it, or a great deal about it because a relative was a survivor or their parents or grandparents "told them all about it". This is actually much trickier than the internet. I want my students to feel a sense of connection to the genocide of millions of Jews, but I don't want their Jewish identity shaped by stories of othering and victimization. Most importantly, I want to widen their horizons--since they only go to school with Jews--and make them aware of the horrific frequency of genocide in recent world history. So, I begin by defining genocide and ask them if they know any groups who have been victimized besides Jews. I then begin to outline the Armenian Genocide and watch the shock on my students' faces. They are then told to write responses detailing how they felt when they discovered that there was a genocide besides the Holocaust. Many of them noted that they were shocked and and how horrified they were. I then write the infamous quote on the board, "No one speaks today of the Armenian Genocide" Adolf Hitler, August 22, 1939.

My students are left to ponder a new path down a road they have never walked.......beyond Wikipedia.