Home > Our Blogs > Facing Canada > Turning a Classroom into a Museum

Turning a Classroom into a Museum

Trips to the museum are a regular part of many history or humanities classrooms. A Facing History and Ourselves teacher in Waterdown and his Grade 11 Genocide and Crimes Against Humanity course students created one in their own classroom.

The exhibit contained artifacts from World War I, World War II and the Holocaust, the Cold War, the Ukrainian Holodomar, and Canada’s residential schools, as well as information on 100 years of Canadian armed service and the 70th anniversary of the liberation of the Netherlands.

"I want them to be in touch with history. If they actually see the items, history becomes tangible and palpable," Waterdown District High School teacher Rob Flosman told The Canadian Jewish News this week. "If students learn about these items and have to teach about them, they own it. It becomes a part of them." 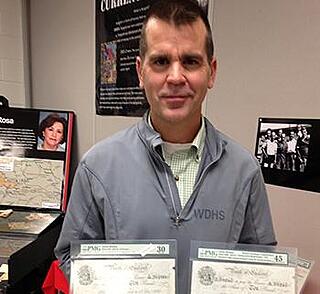 Flosman, a frequent Facing Canada blog contributor, completed the project with support from a 2013 Margot Stern Strom Innovation Grant from Facing History and Ourselves.

Items featured in the exhibit included a Japanese Kyu gunto sword, military medals and IDs, a yellow Star of David and ration cards from a concentration camp prisoner, and more everyday items such as a razor and personal letters soldiers sent home to their families.

"These items show a side of the war many didn't even know existed," student tour guide Adam Hinckley told the newspaper. "They show the more human side."

Read the full article in The Canadian Jewish News.

How do you bring history alive for your students? Comment below!