Posted by Stephanie Corazza and Jasmine Wong on January 29, 2018

A collaboration between Facing History and Ourselves and the Azrieli Foundation's Holocaust Survivor Memoirs Program, first posted on Azrieli Memoirs' Blog page.

Words referencing mass atrocities of the past, such as fascist, racist, Nazi, genocide and Holocaust, carry deep historical meaning, yet these words are often misused in reference to contemporary events. Using these words too casually not only diminishes the meaning of the words themselves, but also diminishes the events that the words represent.   In this blog post, we look to remember the meaning of the term genocide and the conditions that drove a lawyer named Raphael Lemkin to coin this term to describe a horrific crime — a crime that prior to 1944 lacked a name and legal repercussions.

By understanding the meaning of the term genocide and the human suffering to which it refers, students will be able to use it with care and be prepared to evaluate other people’s use of this important term.

Article II of the United Nations Convention on the Prevention and Punishment of the Crime of Genocide defines genocide as follows:

Any of the following acts committed with intent to destroy, in whole or in part, a national, ethnical, racial or religious group, as such:

Combining Dr. Gregory H. Stanton’s description of the ten stages of genocide and first-hand accounts by Jewish Holocaust survivors provides a comprehensive understanding of the concept of genocide. Help your students develop an intellectual understanding of both genocide and the processes that can lead to genocide. A comprehensive approach to the term requires also teaching your students about the human impact of genocide and the historical weight of the term, so that they have a sense of the horrible suffering the term represents.

The Ten Stages of Genocide

Dr. Stanton has usefully described genocide as a process rather than as a single event, a process consisting of ten non-linear stages (they may occur in different orders and they may overlap). These ten stages are described below and are illustrated with the first-hand accounts of Holocaust survivors.

The first stage in genocide is Classification, whereby cultures distinguish people into “us and them” categories on the basis of ethnicity, race, religion or nationality. Watch Margrit Rosenberg Stenge discuss her early awareness of being considered different from other German children when she was growing up in Cologne, Germany, in the 1930s. 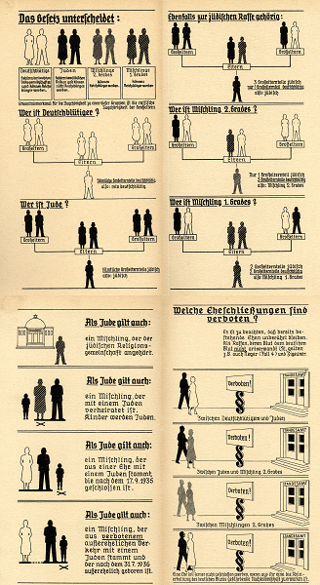 This chart was designed to help Germans determine their racial status as outlined by the 1935 Nuremberg Laws.  [Source: Stadtarchiv Bielefeld, image published in Holocaust and Human Behavior, Facing History and Ourselves]

The second stage in genocide is Symbolization, which occurs when names or symbols are assigned to certain classifications. If classification and symbolization are combined with hatred, these names or symbols can be forced upon members of classified groups. During the Holocaust, Jews in many countries were ordered to wear the star of David symbol sewn onto their clothing. View Muguette Myers’ yellow star of David badge and her school photo with the badge from occupied France in 1942.

The third stage in genocide, Discrimination, occurs when the dominant group uses law, custom or political power to deny the rights of other marginalized groups. Read Claire Baum’s memory of the anti-Jewish measures implemented by the Nazis and their collaborators in the Netherlands in the early 1940s. 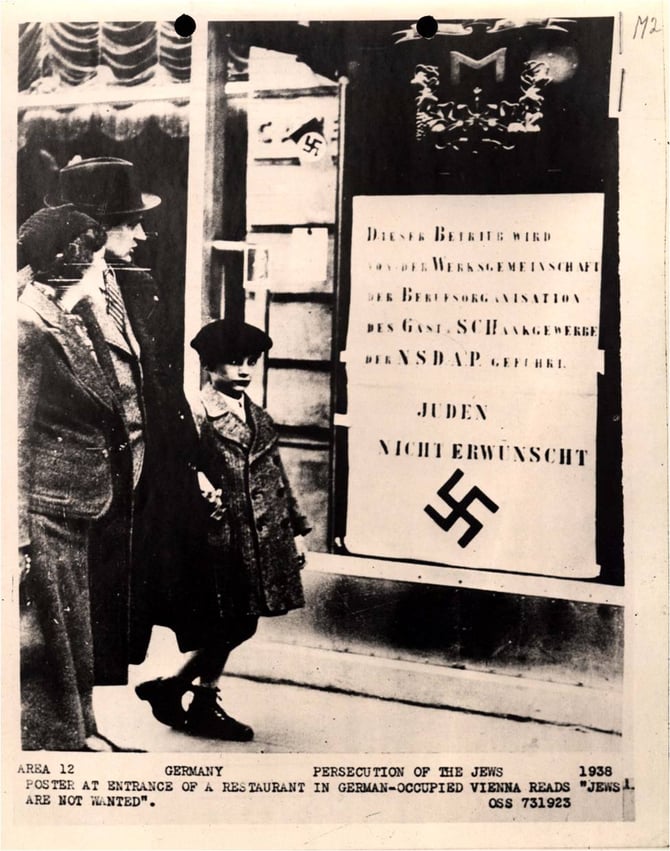 A sign at the entrance to a restaurant in Vienna, Austria, which reads "Jews are not welcome here." 1938. Source: Yad Vashem.

Dehumanization, the fourth stage in genocide, happens when one group uses words or actions to deny the humanity of the other group. Witness Nate Leipciger describe the dehumanization he went through upon his arrival at Auschwitz-Birkenau death camp in 1943. He and his father were robbed of their clothing and possessions, their hair and even their identities - acts that were a continuance of the dehumanization Jewish people experienced beginning in 1933.

The fifth stage in genocide is Organization, the formal or informal efforts made by states or perpetrators to train, arm and direct people in carrying out genocide. Read Michael Kutz’s recollection about an organized effort in 1944 by the Nazis and their collaborators to round up Jews in the Polish village where he lived with his family.

The sixth stage in genocide is Polarization, which refers to measures undertaken to drive groups apart by attacking moderates within the dominant group and the leadership of the target group. During this stage, the perpetrators attempt to rob target groups of any ability to defend themselves. Despite the Nazis’ attempts to weaken Jews, many Jews engaged in self-defence and armed resistance movements during the Holocaust. Watch as Michael Kutz discusses his participation in a partisan resistance unit in Poland in 1942.

Jewish resistance fighters who fought against the SS and German army during the Warsaw ghetto uprising between April 19 and May 16, 1943, are captured. [Source: United States Holocaust Memorial Museum, courtesy of National Archives and Records]

The seventh stage in genocide, Preparation, occurs when perpetrators plan mass killings, indoctrinate the populace with fear of the victim group and cloak their intentions in secrecy. See Leslie Meisels discuss the rumours that he heard about the Nazi “Final Solution,” which the collaborating Hungarian government dismissed as Allied propaganda.

Persecution is the eighth stage of genocide and includes the identification and separation of victims based on their ethnic and religious identity. During the Holocaust, many Jews were segregated in ghettos and deprived of the resources they needed to survive. Watch Arthur Ney explain his motivations to become a food smuggler in the Warsaw ghetto in Poland in 1942–1943. 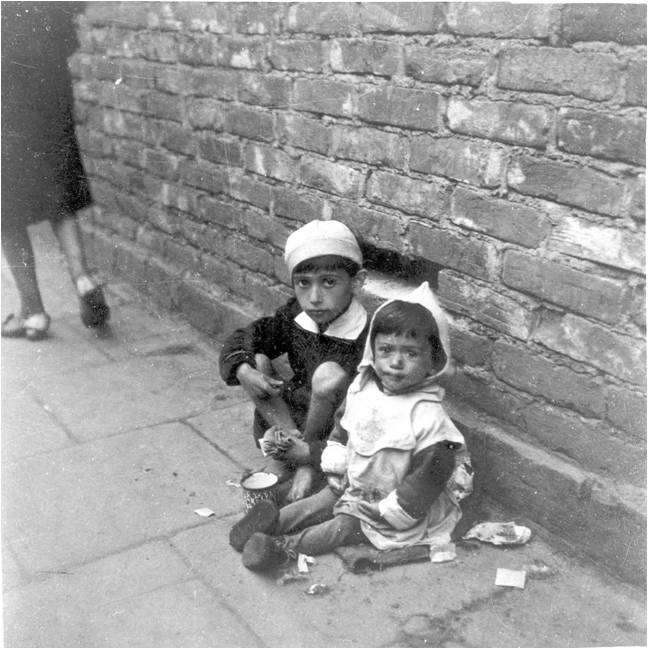 The ninth stage of genocide is Extermination, the mass killing people who the killers do not consider to be fully human. “Extermination” is the term used by perpetrators as part of the dehumanization of their victims, but it is truly mass murder. During the Holocaust, mass killing was carried out using various methods, including gas chambers. Read Helena Jockel’s testimony about the crematorium she witnessed at Auschwitz in 1944, where the bodies of Jews killed in the gas chambers were burned, including Helena’s own mother. 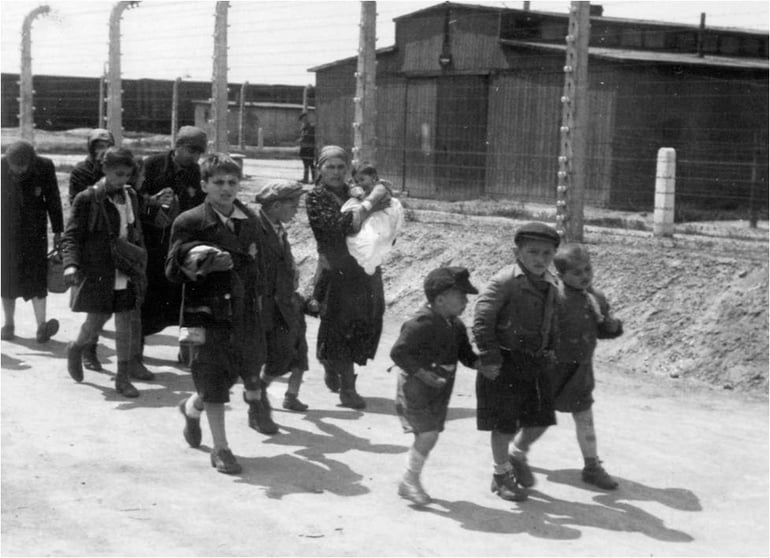 Women and children on their way to gas chamber number 4 in Auschwitz-Birkenau death camp, 1944.

The final stage of genocide is Denial, whereby perpetrators try to cover up the crime that they committed as they are carrying it out and long after the killing has ended. Denial of genocide by people who were not involved in the crime also occurs and serves to minimize the experiences of people who suffered during the genocide. Hear how Marian Domanski was motivated to write his story of survival after he heard about a Canadian man who denied the Holocaust.

As students work through these personal accounts (and the photographs), invite them to make emotional connections to these stories. Ask students to discuss how the definition and personal accounts have added to or challenged their thinking about the steps that can lead to genocide and what genocide really is.

Leave us a reply: How do Stanton’s steps to genocide and the accounts of Jewish survivors of the Holocaust impact your understanding of the term genocide?