Home > Our Blogs > Facing Canada > What These Middle School Students Did Will Amaze You!

What These Middle School Students Did Will Amaze You!

This April, students at the Thomas Street Middle School (TSMS) in Peel took a stand against bullying and homophobia and what they did will amaze you. Watch this video then read on to learn more:

The whole project got its start this past summer, after I completed Facing History’s Holocaust and Human Behaviour summer seminar and wanted to bring some of the ideas about civic action and upstanding behavior into our school community.

Because the Holocaust is not covered in the Ontario middle school curriculum, I began to look for ways to bring this history and other issues of civic education into our school outside of the classroom. In September I began the Upstanders Club. The club started with 30 students from grades 6, 7, and 8, all of whom were interested in discussing human rights issues. 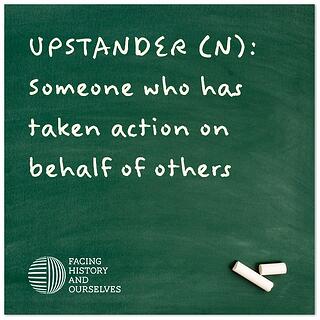 Throughout the year, the students in the club took on different projects to highlight upstander behavior and raise awareness among their peers. We studied different upstanders from history and today, like Nelson Mandela and Chinese artist Ai Wei Wei, and featured information about these upstanders on a bulletin board so that the community could learn more. We talked about issues of civil rights, civic action, and civic participation.

In the fall, the students in the group organized a one-day fundraiser for the victims of Typhoon Haiyan in the Philippines and, with the help of my homeroom class, challenged another school to do the same. In one day we raised $1,217. Around the holidays, the club started a campaign to encourage students to make donations to charities instead of purchasing teacher gifts. Many of the teachers at TSMS put up posters to show their support and with the help of Twitter many teachers across the school board did the same.

This month, the group raised awareness for Day of Pink, an event held on the second Tuesday in April each year to highlight issues of homophobic and transphobic bullying in schools across Peel District School Board. Before the event, we discussed what we mean when we talk about “community” and why some students are treated as less worthy than others. We created an oral identity map, as students discussed the things that influenced their beliefs and how they see people. We covered topics from media and advertising, to parents and history. One student even brought up the issue of words, and how certain words have become attached to groups of people with negative results. She gave as examples the words “9/11” and “terrorist” that is often linked to all people of Muslim faith. 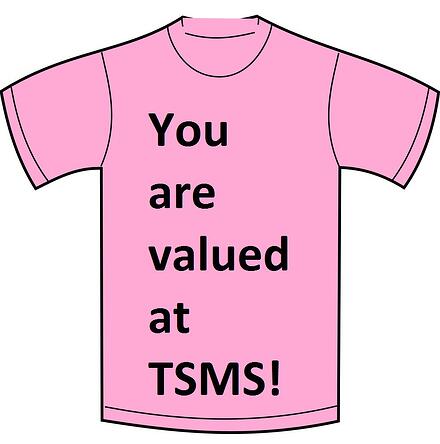 Students each received a blank pink paper t-shirt to write a personalized and positive message to one of their peers. These were attached to the students lockers and remained there for the entire Day of Pink.

The group decided they wanted to create a positive, supportive community. They said that if that is the norm, then bullying of any kind is not. For Day of Pink, each student in the school received a paper pink t-shirt and the name of a classmate. On the t-shirt, the students wrote one positive comment about a peer to send the message that each student in TSMS is seen and valued in our community.

When the day arrived, 700 pink t-shirts decorated the lockers of the school. All day students walked by lockers, reading the positive messages. People smiled as they walked down the halls.

I think the students in the Upstander Club have begun to feel that they do have a voice, and that if they are willing to share their ideas, things can change. Over the course of the past several months, they have seen that because of their actions, which were not that difficult, the lives of their peers and their community improved. In schools, teachers often take the lead on issues because we think the students are not aware or will not take action. These student upstanders have shown me that if we step back, guide, and support, the students will get there and they will do things we never imagined.

Never doubt that a small group of thoughtful, committed citizens can change the world; indeed, it's the only thing that ever has. - Margaret Mead

How have your students become upstanders in their school and community? Please share in the comment section below!

Check out what upstanding students in Facing History educator and OnNetwork blogger Lanny Cedrone's classroom did when confronted by bigotry in their community.