Home > Our Blogs > Facing Canada > Where was God during the Shoah? Jewish students seek answers in Art and Tradition

Where was God during the Shoah? Jewish students seek answers in Art and Tradition

One of my most powerful childhood memories is seeing "The Ten Commandments" in the original "Cinemascope" at the now demolished Glendale Cinema on Avenue Road. I never forgot the grandeur of the huge screen especially in scene where Moses (Charlton Heston) epically raised his arms with the Rod of God aloft, and the sea crashed down upon the pursuing Egyptians while Pharaoh (Yul Brynner) gasped in awe and said: "The Lord is God." So much for nostalgia. I wonder what Moses would have said watching a synagogues of Germany burn down on Kristallnacht when firefighters stood idle and crowds gathered to gawk? He might well have asked, as do my students, "where was God"?

As a teacher of Jewish History in a Conservative Jewish day school, I must address this question. Fortunately, Facing History has provided tools to enable students to search for answers that resonate for them, without feeling compelled to accept 'rote religious answers". As a historian, I fervent believe that it is essential to chronicle religions' responses to Genocide in the hope that we find yet another thread of common language that helps unite us in the quest to eradicate genocide forever.

There are two ways to engage students in a conversation about G-d and the Shoah. One is through the art of the extraordinary Boston based painter Samuel Bak. Teacher's will find it useful to understand Bak's biography so I have a provided a link, but it is important that students simply encounter his art without prior knowledge so they can experience it firsthand without preconceptions.

I first show the class one of the versions of Bak's Creation of War. This requires that they first 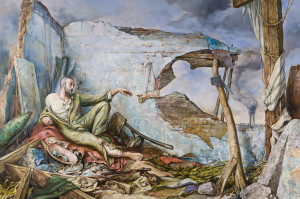 Creation of War, by Samuel Bak

understand that Bak's picture is predicated on Michaelangelo's famous Creation of Man. This is easily accomplished by first showing the students the Renaissance picture and note the orientation of Adam and God and the majesty of the piece. Note also how "visible" and "present" God is in the picture. Have them make a list of what they see and then how they interpret this picture, especially in regards to what the artist is trying to say about the links between the Divine and Human.

Now, remind them again of the methodology Facing History uses with visual images: first write what you see, and then attempt to offer interpretation, and then converse/dialogue about the visual evidence to establish meaning. To focus the discussion more powerfully, ask them in advance to compare the portrayal of God and Man in the two pictures.

My classroom experiences have been fascinating. After students use the Facing History media methodology outlined above, debates arise over whether God is absent or just missing from the picture. Many of the students make observations that have theological insights far beyond their grade level. For example, those who assert that God's outline is still visible see this as a temporary absence of G-d. As one put it: "God's still in the picture but has just stepped out and that's why this war took place." Theologians refer to this as "immanence" and it is a very important issue. For those who really enjoy the esoteric, there is a Kabbalistic (Jewish mystical) belief that G-d can be "more immanent at times" and "less immanent at others", almost like a tide ebbing and flowing. Other students argued that God was absent, though only slightly because humans had used their free will to cause war and God was displeased. This was a reference to their earlier learning experiences about the Jewish interpretation of the story of Adam, Eve, and the Snake.

Other students argued with equal passion, often coming up to the picture and circling elements of it for emphasis, that G9d did not exist anymore and the image of God was, as one brilliant student interested in math once put it, "like a placeholder, just like zero". This is also a very profound comment which has serious theological outcomes.

In any case, the lesson serves its point: it makes students encounter a theological problem in a modality they can relate to, teaches them that art has much to say to them, and allows them to become theologians and grapple with the age old problem of how religion can explain tragedy. These are heady accomplishments for any pre-university student.

Ah, you will say, what of those students who actually want to READ about religious responses to tragedy? Stay tuned for my next post.