Earlier in May, Facing History and Ourselves announced the 2015 winners of our annual Margot Stern Strom Innovation Grants. Facing History selected nine projects, all of which focus on collaborative learning, and were selected from a pool of international applications for their potential to inspire students to make a difference.

Among the winners was Facing History Canada teacher and social justice advocate Ariel Vente, who will use the grant to provide his students with the opportunity to create and design a memorial honoring the legacy of those who lived in and built the Regent Park community, Canada’s largest social housing project and the area in which the school at which Mr. Vente teaches is located. After attending a Holocaust and Human Behaviour seminar with Facing History three years ago, the seed for this project was planted. “After the seminar, I looked at identity and community in a different way. I began looking more closely at what happens when people are included and excluded by our institutions. I also began to make a closer examination of how voice and empowerment strengthens communities,” Ariel told me recently. 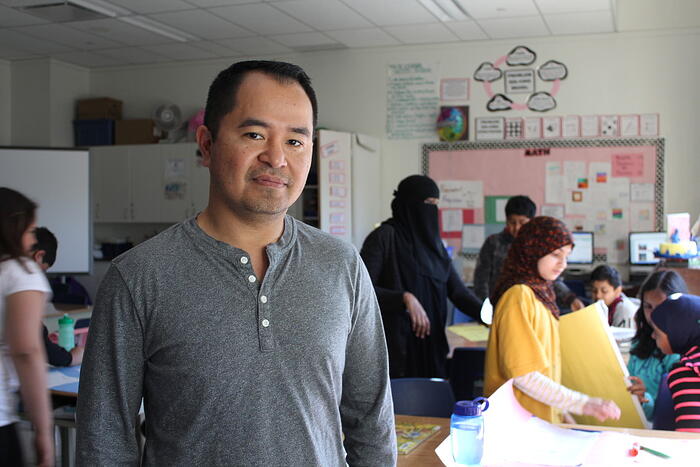 Since its construction in the 1940s, Regent Park has been home to many of Canada’s newcomers. After a wave of crime in the area during the 1980s and ’90s, urban planners and community members began to dream of a revitalized Regent Park, one based on contemporary ideas of urban planning that is taking shape today. The revitalization has not come without costs to the families that live there, however.

Mr. Vente began teaching at the Nelson Mandela Park Public School, in the heart of Regent Park, in 2012.

"When I moved to Nelson Mandela Park Public School, there were so many changes happening because of neighbourhood revitalization," he explained two weeks ago, referring to housing that was demolished, the relocation of families, and the construction of new mixed-income condominiums and community centers. "From talking to students, I became aware of the feelings they were having with regards to displacement, separation, relocation, anxiety, uncertainty. Students were uprooted from homes that they’ve lived in since they moved to Canada. Along with the tearing down of buildings was the loss of students' histories."

I wanted to hear more about how the changes have impacted the community, so I stopped by Nelson Mandela Park Public School to speak with Principal Kandankery, Ariel and his students so I could learn more.

I asked Principal Jason Kandankery to share his thoughts on how the revitalization of Regent Park has impacted the community. He told me, “Revitalization has had a profound impact on the Regent Park community. There has been an obvious upgrade on the physical appearance of spaces and the addition of amenities such a fresh produce grocery store and bank that simply did not exist in the community prior to revitalization.” 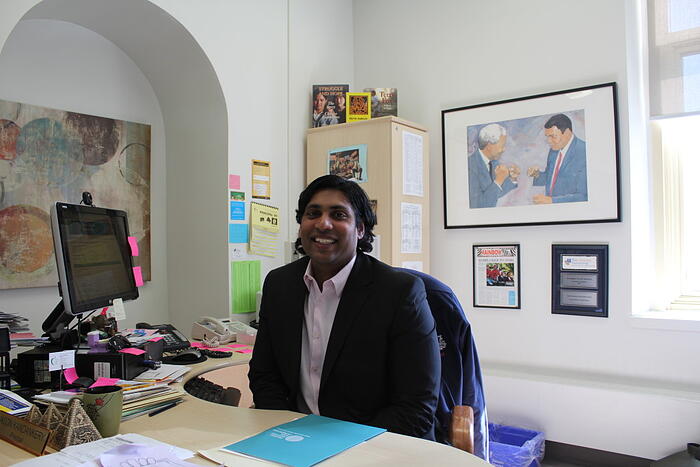 When I spoke to Ariel's students, they reminded me of what is often at the heart of community for young people. Tahmid, a grade 6 student in Mr. Vente’s class, told me his story.

“I grew up in Regent Park. I was born here. It was fun - there was this park called Bigfoot Park and almost everyone would go there and just play [and] there would be barbeques. We all lived close. There [used to be] four buildings. They’ve been destroyed and now almost everyone’s gone, moved out. I’ve had to move two times. I’m still in Regent Park and now there’s new people [who have moved in to the neighbourhood] from outside but not that many people leave their houses now [to do activities together as a community].”

Tahmid and Rajon, two students in Ariel's class who shared their thoughts on the revitalization of Regent Park with me.

Rajon, another student in Mr. Vente’s class, also grew up in Regent Park.

“I moved from Sumach Street to a townhouse on River Street. My old house had three floors. We had neighbours, and one of our neighbours was a Pakistani man who grew flowers in front of his house. Every day he gave us flowers. There were a lot of barbeques, it was a lot of fun. I stayed there until I was nine years old, then I moved to Bangladesh. A year and a half passed before my parents decided to go back to Canada. Where my house was, now there is a big crater. Now we [are living in] a tiny apartment in a really old building. I sleep on [a matress] on the floor [and share my room with] two sisters. In total, my family has six people and sometimes my grandmother comes to stay with us. It’s so hard to live there. It’s hard to do schoolwork. We’ve been told most likely we will get a new house in 2016.”

Although Principal Kandankery recognizes the negative impact revitalization has had on the families in his school, he is optimistic about the future for residents of Regent Park and the way new communities are beginning to form.

"There has been significant displacement of families as they have been re-located throughout the city," he said. "The families that choose to come back are returning to beautifully built new housing units. At the school-level there is now a greater mix of families from Toronto Community Housing and those from market housing. Thus far, we are seeing a good level of social cohesion. For example, at our School Council table we have a mix of parents who have lived in the Regent Park community for many years in social housing, and also new families who reside in the recently-built market housing units. Jointly these parent groups have come together to help lead initiatives at our school such as fundraising to support class field trips."

With all these changes, Mr. Vente stays centred on giving his students a sense of agency in the changes and retaining a memory of what's past.

"I want students to not forget their history,” he says about his vision for the project. “What I am finding is that, as buildings are torn down, residents leave, but few return to pass on the story of Regent Park. By gathering that history and creating memorials to mark it, students will honour those that helped to build the community and memorialize the community members and events that impacted the people in Regent Park. More importantly, I want students to know that they have a voice, and can play a part in the designs and changes that shape the redeveloped community. Students can leave a legacy and shape the way the history of Regent Park is remembered." 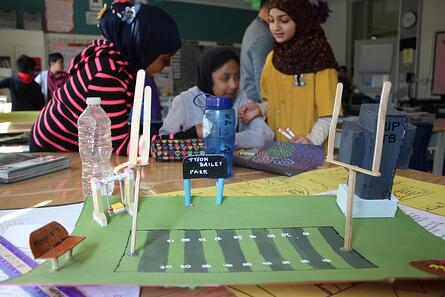 Tyson Bailey Memorial Park, a sample memorial built by students to remember a past student at Nelson Mandela Park PS who was killed by gun violence in January 2013. 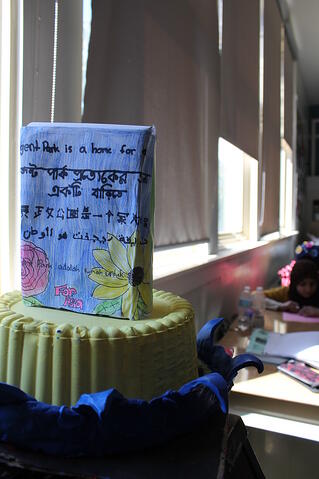 "Regent Park is a Home for All," written in multiple languages. One student's sample memorial to honour past residents of the community.

To see his proposal become a reality, Mr. Vente will need more than the support of his school community and grant funding. He will need the help of professionals such as architects, visual artists, city planners, and designers to share expertise with and support the students. If you would like to get involved in the Regent Park Immigrant Memorial project, or share your story about Regent Park, please leave a comment or email Ariel Vente, ariel.vente@tdsb.on.ca