Home > Our Blogs > Facing Canada > From Understanding to Upstander: Inside a Genocide Studies Classroom

From Understanding to Upstander: Inside a Genocide Studies Classroom

One of the questions that we often struggle with as teachers, and even more so as teachers that cover issues of genocide, is How do we even begin to understand something that is so far removed from most of our personal experiences?

When I begin my Grade 11 Genocide and Crimes Against Humanities course (CHG38), I start with a study of identity and membership. During these lessons, we have conversations about prejudice, discrimination, extreme political ideologies and the integration of different groups; these concepts are fundamental to the study of genocide, but they are also incredibly relevant concepts in our own and our students’ lives and personal experiences.

One of the most common themes that students raise when discussing issues of identity and membership is bullying. This connection that the students make, between human behaviour in genocide and human behaviour in bullying, is a complicated one. When these concepts become linked together in the classroom, I am very careful in the comparison to not oversimplify the connection: There are important differences between individual or group bullying, and systemic or national campaigns to eliminate a group of people. I don’t want students making a facile comparison, but I do want them to see that there are parallel behaviours: prejudice, targeting, dehumanizing, terrorizing, and perpetrating.

It is this parallel that I think allows students to make a personal connection to their own lives. Most of us have never had a direct personal experience with genocide or mass violence. However, almost everyone has had some personal experience with bullying, whether as the bully, the bullied, the bystander, or the upstander – a term that has been used to individuals who take action on behalf of others. 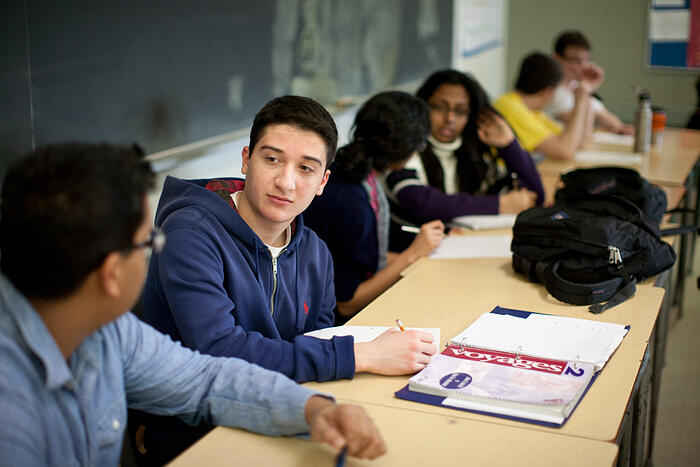 Students in a Genocide Studies classroom discuss questions that connect to history and themselves. Photo credit Nick Kozak.

In class, I like to use various hypothetical situations to get students thinking about their own responses. For example, I might ask:

These are examples of scenarios that most students can readily comprehend and usually have strong opinions about. Not only do they serve as good conversation starters, but they evoke ideas and raise questions about human behaviour, roles and responsibility that I can return to again and again in the course as we begin looking into history.

These scenarios allow students to think critically about the complex concepts of our universe of obligation, bystander behaviour, responsibility, justice, and reconciliation. These kinds of conversations inform students' understanding of the Nuremberg or Tokyo Trials later in the course, as students consider:

Connecting History back to Everyday Choices

However, the most important and valuable aspect of making these connections between bullying and genocide is not just recognizing the parallels in prejudice and human behaviour, but the immediate opportunity for students to become upstanders in their own community. There are limited means for a student to intervene directly in crimes or a genocide that occur a world away, but becoming an upstander in the hallways, in the classroom, and among peers provides a direct opportunity for students to speak up and choose to participate.

I think specifically of a moment that occurred last year. It began when I overheard a commotion in the hallway. When I stepped into the hall, I saw one student threatening another and a small group of bystanders gathering around to watch. As I entered the hallway, I also saw one of the students from my class– and a friend of the aggressor’s - walk through the conflict and say something like, “Ok, let’s go, we all gotta get to class.” No sermon, no grand speech, but her intervention did stop the situation from escalating and a student from being attacked. I spoke to the student about what she had done and she said she thought of the discussions from class about being a bystander and the importance of intervening. She didn’t think that she had done much. Upstanders often don’t. But I’m sure the student who was being threatened appreciated her intervention.

What strategies do you use in your classroom to build bridges between choices from history, with those your students confront each day? Comment below!

My name is Lanny Cedrone and I am a high school teacher in Brampton, Ontario and I am teaching the Genocide and Crimes Against Humanity course. I am relatively new to the course and taught it for the first time last year and this semester is my second time through it. Several years ago I participated in a Facing History workshop seminar and even before I taught the genocide course I incorporated many ideas, lessons, and strategies from my experience into my other history courses. My involvement with Facing History has shaped my approach to teaching genocide