Home > Our Blogs > Facing Canada > Inside a Genocide Studies Classroom: Where to Begin? Identity

Inside a Genocide Studies Classroom: Where to Begin? Identity

With any new course, teachers will often ask themselves, “Where do I begin?” This is an even more daunting question when dealing with such a difficult subject as genocide. In my preparation for teaching the Grade 11 Genocide and Crimes Against Humanities course at Louise Arbour Secondary School, I asked myself, “How can the students and I relate to situations that are so extreme and beyond most of our experiences?”

I didn't want the course to be reduced to a listing of the various data and statistics of many genocides. I wanted to humanize the history so that we could connect with the people and not just learn dates and numbers.

The course begins, not with a focus on genocide from a historical context, but with an exploration of issues and questions of identity and membership, which is also the start of the Facing History Scope and Sequence. 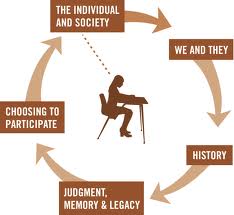 The focus on identity serves as the foundation for the rest of the course and the lens through which we examine each of the case studies of genocide that we look at throughout the course, such as Armenia, the Holocaust, and Rwanda. We explore issues of identity such as race, religion, gender, and sexuality, among others. We explore how group identities can influence individuals and create both inclusion and exclusion. We focus on the power of stereotypes, prejudice, and discrimination. This is especially important in opening a dialogue in which students can feel comfortable asking honest questions and challenging assumptions. These are the moments that a student will nervously ask, “But aren't stereotypes true?” I try to avoid the facile answers of “Yes or No” and instead deal with stereotypes as distortions and limitations of half-truths. All of this serves the purpose of encouraging and allowing students to think critically about how they see themselves and others and to understand both how these perceptions can be manipulated, but also how they can be challenged and broadened. Throughout the rest of the course, we continually return to these issues and concepts of identity and membership to help us gain a more complete understanding of why and how genocides and crimes against humanity occur.

Below I have listed some resources and ideas that I use during the identity unit. Click on the links to check out the resources. They can be adapted for different courses and I actually began using some of them in teaching the Holocaust in a World War 2 unit in the grade 10 Canadian history course.

How do you try to get students to think critically about identity, stereotypes, and prejudice in your classroom? Comment below!

Want to learn more about Facing History’s Scope and Sequence? Enrollment is now open for our five-day summer seminar Facing History and Ourselves: Holocaust and Human Behaviour. Learn more and sign up!

Topics: Identity, milgram, We and They, Strategies, Genocide and Crimes Against Humanities Course, Inside a Genocide Classroom

My name is Lanny Cedrone and I am a high school teacher in Brampton, Ontario and I am teaching the Genocide and Crimes Against Humanity course. I am relatively new to the course and taught it for the first time last year and this semester is my second time through it. Several years ago I participated in a Facing History workshop seminar and even before I taught the genocide course I incorporated many ideas, lessons, and strategies from my experience into my other history courses. My involvement with Facing History has shaped my approach to teaching genocide